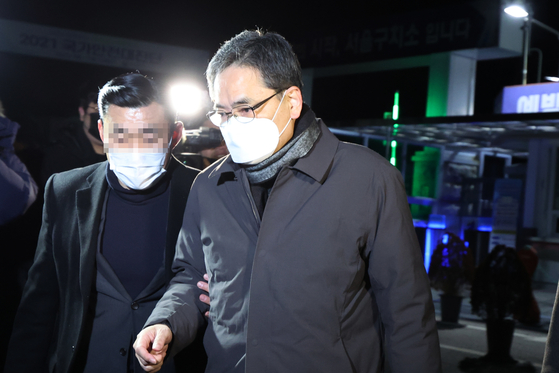 
An arrest warrant request filed by prosecutors against former lawmaker of the main opposition People Power Party (PPP) Kwak Sang-do on the charge of peddling influence to benefit a company at the center of the Daejang-dong development project was dismissed by a Seoul court late Wednesday evening.

Kwak is suspected of lobbying on behalf of Hwacheon Daeyu, a small asset management company that invested in the Daejang-dong development in Seongnam, Gyeonggi, in exchange for a massive severance payout to his son who was an employee at the company until March.

“There remains room for dispute in establishing the charge against the accused, whose rights to legal defense must be guaranteed, while the necessity of his arrest was not adequately proven,” the judge read from the court’s decision.

The court’s refusal to issue an arrest warrant for Kwak dealt a blow to prosecutors’ investigation into the so-called “5 billion won club” of individuals allegedly each promised that sum by Hwacheon Daeyu in return for preferential treatment in the Daejang-dong development.

Kwak landed on the prosecutors’ radar after it came to light that his 31-year-old son received a severance payment of 5 billion won ($4.2 million) in March after seven years’ employment as a mid-level employee at the company.

The lawmaker resigned from the PPP on Sept. 27, and later from his seat in the National Assembly on Oct. 2, after the news of his son’s severance package broke.

Hwacheon Daeyu has raked in a profit of 57.7 billion won ($48.3 million) since 2019 on an investment of 49.95 million won, or a 1 percent stake in the mixed public-private development consortium that developed the Daejang-dong area.

Hwacheon Daeyu’s outsized profits from the development have sparked a monthslong probe by prosecutors into those suspected of rigging the project’s shareholder composition and profit distribution scheme in favor of the previously little-known company, its affiliates and their owners.

Those whose arrest warrants have already been approved by the Seoul Central District Court include Kim Man-bae, owner of Hwacheon Daeyu; lawyer Nam Wook, owner of Cheonhwa Dongin No. 4; and Yoo Dong-gyu, former acting president of the Seongnam Development Corporation.