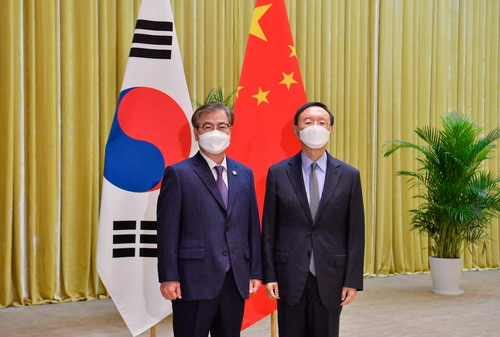 Suh Hoon, left, director of the Blue House National Security Office, and Yang Jiechi, a member of the Politburo of the Chinese Communist Party, pose for a photo ahead of talks Thursday in Tianjin, China. [CHINESE FOREIGN MINISTRY]

Suh, director of the Blue House National Security Office (NSO), and Yang, a member of the Politburo of the Chinese Communist Party and director of China’s Central Foreign Affairs Commission Office, held talks and a dinner meeting Thursday in Tianjin, a coastal city in northeastern China.

The two sides also discussed the possibility of a virtual summit between President Moon Jae-in and Chinese President Xi Jinping as early as next month.

Yang said that China “supports the push for an end-of-war declaration” and believes it will “contribute to promoting peace and stability on the Korean Peninsula," according to the Blue House.

The Chinese Foreign Ministry’s statement, however, didn’t directly mention the end-of-war declaration. It simply said that Yang hoped each country “will keep playing a constructive role in realizing long-term stability on the peninsula.” Its statement emphasized Seoul’s support for the Beijing Winter Olympics and cooperation on the international global supply chain issue.

Suh told reporters in Tianjin Friday that he explained Seoul’s “efforts to advance the peace process on the Korean Peninsula, including a declaration to end the Korean War,” and that Yang in turn expressed his support.

On the issue of whether denuclearization of North Korea was included in a draft of the end-of-war declaration, the official said, "We are not at the stage to discuss the text right now."

Regarding Xi’s long delayed visit to South Korea, Suh told reporters that the two sides “agreed to proceed as soon as the Covid-19 situation stabilizes and all conditions are in place.”

Xi has yet to return a state visit to South Korea despite Moon’s trips to China in 2017 and 2019.

Whether Moon will attend the Beijing Winter Olympics next February has not been decided.

A high-ranking South Korean government official said there are many factors to consider, including the Covid-19 pandemic, while leaving open the possibility of “communication that is not face-to-face between the leaders.”

The official said on an end-of-war declaration, “One of the fundamental aspects is to clear up the situation that lasted for 68 years where technical regulations are not clear, and another objective is creating momentum to resume dialogue with North Korea.”

In September, Moon proposed in an address to the United Nations General Assembly that the two Koreas, the United States, and possibly China formally declare an end to the Korean War.

Suh and Yang both separately met with U.S. national security adviser Jake Sullivan in October, while Seoul and Washington have discussed the end-of-war proposal in recent weeks.

China has reacted sensitively to the Taiwan issue, and Yang expressed concerns that the Taiwan Strait was mentioned for the first time in the joint statement after the SCM, according to the Chinese Foreign Ministry.

However, the high-ranking South Korean government official said that the matter was “not a matter of interest” during Suh and Yang’s talks.

Suh and Yang also discussed industrial supply chain issues, including the shortage of urea, a key material for diesel emissions fluid (DEF) for vehicles in Korea.

Suh said that similar supply problems should be prevented from occurring in the future.

He said, “China said it is well aware of the importance of the complementary nature of Korea-China economic cooperation, including the stable supply of raw materials, and said that it will make active efforts towards this end in the future.”

China called for the two countries to ensure “stable communication on regional and global industrial supply chains.” The remarks come amid the ongoing Sino-U.S. trade wars and may be a part of Beijing’s efforts to discourage Seoul from taking part in the U.S. efforts to move supply chains away from China, including the semiconductor industry.

Likewise, China was said to have stressed intentions to strengthen cultural exchanges between the two countries.

China and South Korea next year will mark the 30th anniversary of the establishment of diplomatic ties, while 2021 has been labeled a year of cultural exchange.

A Korean film, “Oh! My Gran,” opened in Chinese mainland theaters Friday. It was the first Korean film to open in six years. China has been boycotting the South Korean entertainment industry since Seoul’s decision to deploy the U.S.-led Terminal High Altitude Area Defense (Thaad) antimissile system in 2016.