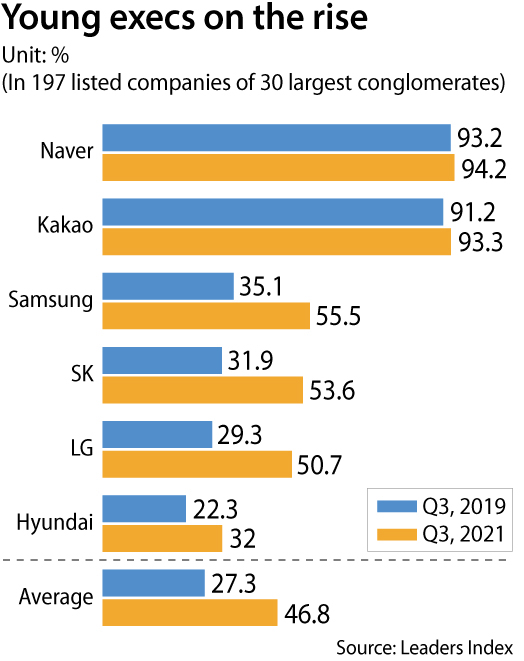 Nearly 50 percent of the C-suite occupants in Korea's 30 largest business groups are under the age of 53 — far more than two years earlier.

According to a Leaders Index’s survey, there were 7,438 executives in 197 listed companies controlled by Korea’s 30 largest conglomerates as of the end of the third quarter. Of them, 3,484, or 47 percent were Gen Xers or younger. The company grouped those born 1969 to 1978 as Generation X.

Tech companies like Naver and Kakao helped drive the trend.

In Kakao, Kakao Games and KakaoBank, there were 15 executives and 14 were under 53, excluding Kakao founder and Chairman Kim Beom-su, who is 55. Kakao recently named 44-year-old Ryu Young-joon, who currently serves as head of Kakao Pay, as its co-CEO.

In the country’s top four conglomerates — Samsung, Hyundai, SK and LG — around 48.6 percent of executives were Generation X or millennials. Samsung had a total of 1,861 executives, and 1,033, or 56 percent, were younger than 53.

Around 54 percent of SK's executives were younger than 53, while LG had 51 percent. Both were up more than 20 percentage points compared to just two years ago.

Among the top four groups, Hyundai had the fewest young executives. Of its 1,051 executives, 32 percent are 52 or younger.

By job category, young leaders were concentrated in tech or IT,  biopharmaceuticals and retail.

Celltrion, developer of Korea’s first Covid-19 treatment, Regkirona, had about 73 percent of its executives younger than 53. CJ had 67.4 percent while Lotte had 61.3 percent. In Shinsegae, the percentage was 54.4 percent while at Hyundai Department Store it was 51.2 percent.

“The percentage of young executives was particularly high in major conglomerates where the younger children were named heads of the companies, like Samsung, LG and Hanwha, as well as fast-growing industries like IT, bio and retailers,” Park Ju-gun, CEO of Leaders Index, said. “The trend will accelerate after companies conclude their ongoing personnel reshuffles.”

The oldest C-suites were found in steelmaking and oil refining. Posco bottomed out the list with 0.7 percent of its executives under the age of 53, while Hanjin had 13.9 percent and oil refiner S-Oil 16.4 percent.

“Gen Xers account for the largest population in Korea, and have the most spending power,” said Kim Ran-do, a consumer science professor at Seoul National University. “When new products or services come out to the market for the first time, it’s MZs [millennials and Generation Zs, born between 1996 and 2010] who first experience them. But it's Gen Xers who can land them in the market safely.”

Among the 30 largest conglomerates, only 1 percent of executives, or 95, were millennials. Naver had the most with 23, while Samsung had 13 and SK 9. The youngest executive was 33-year-old Kim Joo-young, the eldest daughter of Kim Hong-kuk, chairman of the food industry giant Harim Group.