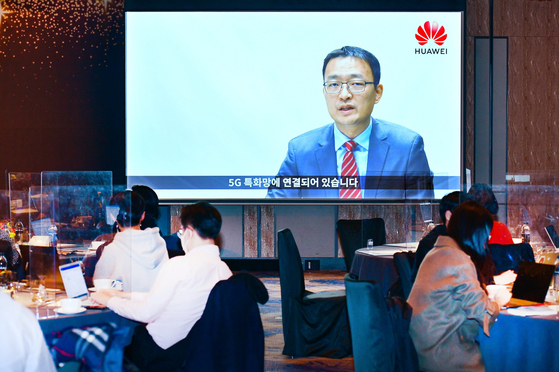 Karl Song, vice president of corporate communication at Huawei Global, urged the U.S. to stop restrictions on Chinese businesses to bring life back to the global economy in a video message to the Korean press on Wednesday. [HUAWEI]


The U.S. must stop restrictions on Chinese businesses to bring life back to the global economy, Shenzhen-based tech company Huawei said.

“These actions have hugely affected our business, but they have hurt the global semiconductor industry even more,” said Karl Song, vice president of corporate communication at Huawei Global, in a video message to the Korean press on Wednesday.

Song’s message came during a year-end press conference held by Huawei Korea in central Seoul. Song initially planned to come in person, but could not attend due to the pandemic situation.

“It's true that there are still many challenges ahead of us, like those that have affected our consumer business revenue,” Song said. “But we are fully confident in our long-term development for many reasons.” 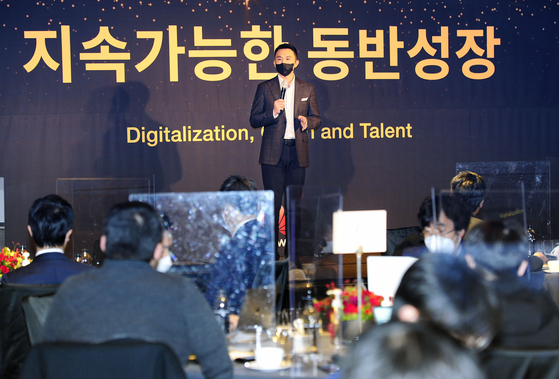 
A major keyword of Wednesday’s conference was talent.

The company said it will invest $15 million over the next five years to nurture fresh talent in the global digital sector, including in Korea. No specific figure for the company’s investment in Korea was given.

“It is the path of sustainable growth along with our customers and clients that we plan to take into the future. And to do so, we promise to nurture global talents as well as those in Korea.”

According to Sun, who took over the Seoul office in early 2020, Huawei Korea has helped educate 3,000 individuals in Korea through various programs such as workshops, scholarships, free online courses and providing job consultations to university students.

Thousands of jobs were created thanks to Huawei Korea’s direct and indirect partnerships with local companies, Sun said.

“We have been hiring more in Korea this year, and that’s resulted in over 80 percent of our employees being Korean,” Sun said.

“Next year marks the 20th anniversary for Huawei Korea. And we believe that during those years, we have been a responsible member of the ICT field in Korea.”