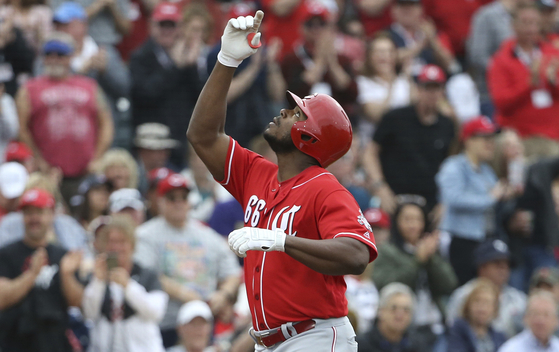 Yasiel Puig points to the sky as he celebrates a home run against the Cleveland Indians during a game on March 11, 2019 in Arizona. [AP/YONHAP]


The Kiwoom Heroes have signed former MLB All-Star outfielder Yasiel Puig on a one-year deal worth up to $1 million.

The details of Puig's contract had not been confirmed as of press time Thursday, but sources had confirmed that the Cuban "Wild Horse" would be joining the Heroes for the maximum $1 million, according to the JoongAng Ilbo.

Kiwoom were reportedly among three clubs attempting to bring Puig to the KBO next season. In signing the former All-Star, Kiwoom have secured probably the most famous player ever to join the Korean league, but one that comes with his own problems as well.

Puig debuted in 2013 with the Los Angeles Dodgers, appearing in 104 games in his rookie season with a .319 batting average, 122 hits, 42 RBIs and 19 home runs to finish runner-up in the NL Rookie of the Year race. In his first 15 games alone, Puig had 27 hits, tying with Joe DiMaggio and Terry Pendleton for the second-most ever.

Puig went from strength-to-strength over the next few years, making the All-Star team in 2014 and hitting a career-best 28 home runs in 2017.

But issues both and off the field — including a number of bench-clearing brawls, an arrest for reckless driving and, recently, an accusation of sexual assault — began to overshadow Puig's career. In 2018 he was transferred to the Cincinnati Reds and then on to the Cleveland Indians in 2019.

In 2020 Puig failed to sign a new major league contract, delaying his decision to see more offers and then contracting Covid-19 before a deal could be reached. This year, he opted to move to the Mexican league and the Dominican winter league but had expressed his desire to return to the majors.

Puig's decision to join Kiwoom may have been motivated by the number of players who have recently returned from Korea to find success in the MLB. Josh Lindblom of the Milwaukee Brewers, Chris Flexen of the Seattle Mariners and Brooks Rayleigh of the Tampa Bay Rays all had successful careers in the KBO that they were later able to convert into a second shot at the majors.

Recent remarks from Puig have made it clear that he has rehabilitation on his mind — last week he called on the MLB to better support Latino players adapting to U.S. culture.

"As a Cuban immigrant I came to play on the biggest stage of baseball without the proper guidance in place to help me fully assimilate, so I had to learn my lessons the hard way," Puig told Dodgers Nation through his agent last week. "I do not want another player with a similar background to experience the same hardships that I went through."


A successful spell in the KBO could help the Cuban star convince MLB scouts that he is ready to return to the big leagues.