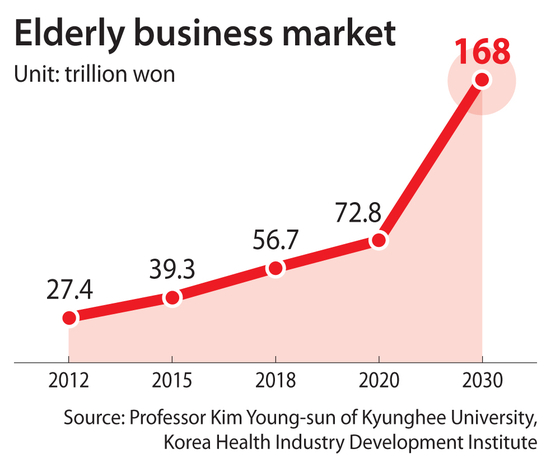 The aging of Korea is seen as an opportunity by some companies.

"We expect the market to grow due to the rapidly aging society, and thought that occupying the market in advance was important," said a spokesperson for KB Insurance.

Shinhan Life has applied with the Financial Supervisory Service to establish a subsidiary tentatively named Shinhan Cube On.

Milk producer Maeil Dairies split off its health and nutrition division in October, setting up its Maeil Health Nutrition subsidiary, which aims to make health supplements. The milk producer has converted some of its powdered milk production lines to manufacture dietary supplements.

"Due to low birth rates and the aging society, we needed to expand our infant and children focused business to target the elderly," said a spokesperson for Maeil Dairies.

According to Kyunghee University's New Aging Center for Senior Businesses, the so-called "silver economy" — the market targeting the elderly — was 72.8 trillion won in 2020. The industry is expected to grow an average 13 percent on year to 168 trillion won in 2030.

"People being classified as the elderly are the so-called YOLD generation, and boosting their consumption, and offering services fit for them could be a new growth engine for Korea," said Kim Young-sun, a professor teaching elderly studies at Kyunghee University, using the marketing term for the "Young Old." "We need to invest in research and development in fields related to the silver economy to ensure sustainable development in an aging society."

The YOLD generation are people born between 1946 and 1964, who tend to be more active and more likely to consume than older retirees.

"The beneficiaries would be the elderly, but people developing and offering such services will be the young, which could create jobs for the overall population," said Professor Kim.

The government is working to help companies that offer elderly-related services and products. The Ministry of Economy and Finance held a meeting on Tuesday, vowing to provide support for businesses in health and senior care.

"We will try to boost the economy by creating new industries and business models," said Vice Finance Minister Lee Eog-weon, at the meeting.