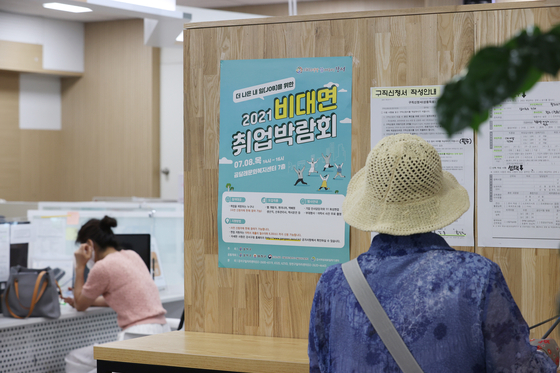 A job center in Seoul in July. Seniors are becoming more economically independent thanks to various governmernt job programs. [YONHAP]

Korea's baby boomers are even more economically independent than before.

A study by Statistics Korea released Monday found that 57.7 percent of people over the age of 59 said they made their own livings rather than relying economically on children or other family members.

A key contributing factor is the availability of jobs for seniors. Thanks to government programs, people over the age of 59 is the only age group that has seen a continuous increase in jobs.

“The baby boomer generation has a higher ratio of college educations compared to the previous generation and they are relatively better prepared including wealth accumulation for life after retirement,” said Jung Nam-soo, Statistics Korea's director on population census.

The study also found that the unmarried population has increased, particularly among people in their 30s.

By age, people in their 30s were more likely to be single.

Education levels seemed significant in the choice to remain single.

Among women, the group with the largest percentage of singles was women with a masters’ degree or higher at 22.1 percent followed by those with a four-year college degree (20 percent) and those who graduated from two-to-three year colleges (16.5 percent).

The study included information on pets for the first time.

According to the study, in 2020 there were nearly 3.13 million households that raised pets, or 15 percent of all households.

Households that raised dogs were the most -- 2.42 million or 11.6 percent of all households in the country -- while cats trailed behind with 717,000, accounting for 3.4 percent.

Families led by women tend to have more pets.