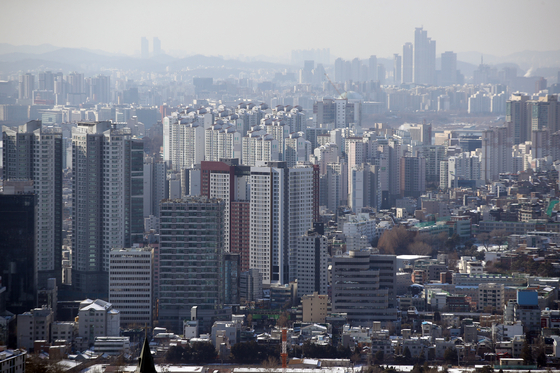 Korea had the fastest rising home prices in the third quarter, according to Knight Frank on Saturday. Seoul's apartment complexes and houses are in view in this photo taken on Sunday at Namsan, central Seoul. [YONHAP]


Korea had the fastest rising home prices in the third quarter, according to Knight Frank.

The British real estate consultancy said residential real estate prices in the country jumped by 23.9 percent during the July-to-September period compared to the same period a year earlier, the biggest jump among the 56 countries in the company's Global House Price Index.

Korea was followed by Sweden, where third-quarter housing prices rose by 17.8 percent on year, New Zealand at 17 percent and Turkey at 15.9 percent.

These growth rates were in real terms, so they are adjusted for inflation.

Turkey had the highest rate of annual price growth in nominal terms, 35.5 percent, a figure that does not take into account the country's inflation rate, which was 19.3 percent in the third quarter.

Housing prices are rising worldwide, with the value of an average home up by 9.4 percent on year in the third quarter. That's higher than the 9.2 percent on-year growth reported during the second quarter.

Out of the 56 countries, all reported higher house prices with the exception of Malaysia and Morocco, and in 48 percent of the countries prices were up 10 percent or more. That percentage was only 13 percent in the first quarter of 2020, at the beginning of the Covid-19 pandemic.

"Here, interest rate hikes, changes to property taxes and affordability concerns are contributing to slower rates of growth," the report said, but it noted that price increases are expected to continue nonetheless.

"The real estate boom we've seen globally is expected to continue into 2022, Omicron and new variants permitting," the report said.