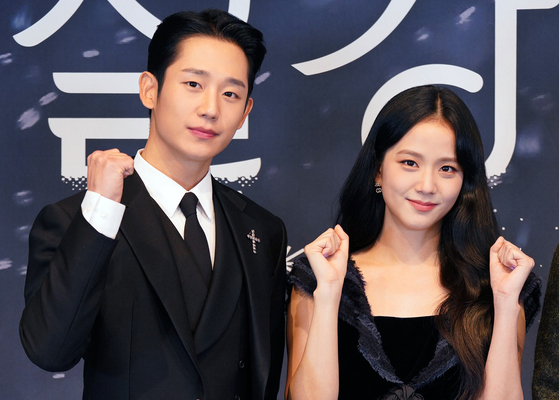 
JTBC drama series “Snowdrop,” which has been on the receiving end of criticism after its first two episodes aired, will release three episodes this weekend instead of its usual two in the hopes of laying the backlash to rest, JTBC Studio said Thursday.

“The controversy related to ‘Snowdrop’ is still ongoing,” JTBC Studio said. “We believe that the misunderstandings related to the story are brewing because the viewers cannot simultaneously grasp all the narrative from the beginning. So we decided to pre-air more episodes to quell their worries.”

Featuring actors Jung Hae-in and Jisoo of Blackpink, the story is set in Seoul in 1987 when Korea was in the midst of democratization protests against the military dictatorship. It centers around the love story of a South Korean college student Young-ro (played by Jisoo) and a North Korean spy named Su-ho (played by Jung).

In the first two episodes, college students resisting against the regime harbor Jung’s character, mistaking him for a fellow pro-democracy activist. Many viewers found this plot problematic, since the dictatorship at the time justified its brutal crackdown on pro-democracy activists as simply hunting down North Korean spies or communism sympathizers.

The studio explained that episodes 3 to 5 will unveil the reason why Su-ho came to South Korea and the corrupt forces behind him, “connecting why the prior narrative was established this way.”