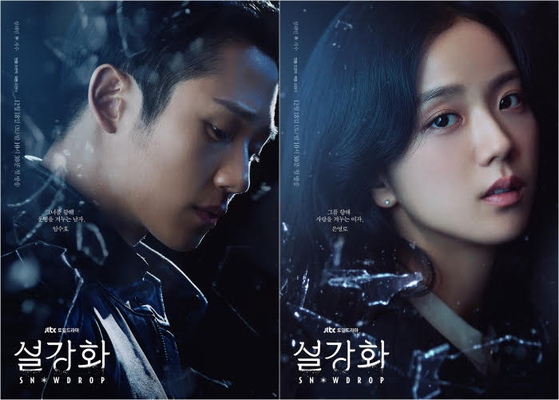 
Several brands withdrew their sponsorship for JTBC's "Snowdrop" as the series is being accused of distorting the history of Korean democratization.

“Snowdrop,” starring actors Jung Hae-in and Jisoo of Blackpink, launched on Saturday and aired two episodes over the weekend. Set in Seoul in 1987, when Korea was in the midst of democratization protests against the military dictatorship, the series tells the love story of a South Korean college student (played by Jisoo) and a North Korean spy (played by Jung).

In the series, college students resisting against the regime harbor Jung’s character, mistaking him for a fellow pro-democracy activist. Many viewers found this plot problematic, since the dictatorship at the time justified its brutal crackdown on pro-democracy activists as simply hunting down North Korean spies or communism sympathizers.

A petition on the Blue House website to stop broadcasting “Snowdrop,” posted on Monday, has garnered over 306,000 online signatures as of Tuesday morning.

"So many people were falsely accused of espionage during Korean democratization and were brutally tortured or killed,” reads the petition. “A series with a plot like this takes away from the value of democratization.”

Almost immediately after backlash arose, several brands such as Teazen, Hans Electronics, Ganisong, Ssarijai, Do Pyoung Ceramics and Puradak Chicken — ranging from food to fashion — withdrew their sponsorships for “Snowdrop.”

The companies all issued official statements on their website, apologizing to viewers offended by the historical distortion and claiming that they were not informed about the exact storyline of “Snowdrop.”

Although all episodes have already been filmed, the companies said they will request the series to delete their names from the credits and minimize their products’ appearance on air.

On Tuesday, JTBC addressed the backlash with an official statement.

“Neither the first nor second episode, or any parts later in the show, depicts any North Korean spy leading Korea’s pro-democracy movement,” the statement reads. “Current widespread concerns of ‘distorting history' and ‘insulting the democratization movement’ will be mostly resolved as the show proceeds. We will also actively accept feedback from viewers.”