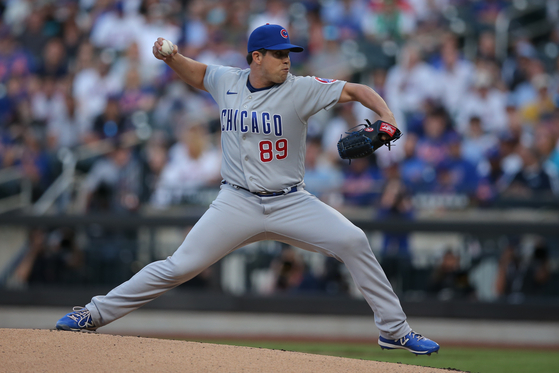 
The Doosan Bears announced Wednesday that they have acquired free agent pitcher Robert Stock on a one-year deal worth up to $700,000.

Stock was drafted in 2009 by the St. Louis Cardinals as a catcher, but switched to pitching by 2011 and spent the majority of his career playing in the minors, even spending a stint playing in the independent baseball leagues in 2016.

Almost a decade after his career started, Stock finally made his major league debut with the San Diego Padres in June, 2018. He made a total of 55 major league appearances over the following four seasons with the Padres, the Boston Red Sox, the Chicago Cubs and, most recently, the New York Mets.

He only started three times in the majors, although he will presumably enter the rotation like most foreign pitchers in the KBO, and has a career line of two wins, four losses and a 4.71 ERA over 72.2 innings pitched.

Yet although his major league stats are unimpressive, Stock does bring an impressive arsenal with him to the KBO. Stock throws a 155-kilometer-per-hour (96-mile-per-hour) fastball, although he has reportedly thrown it at speeds over 100 miles per hour during his time in the minors. He also throws a cutter, a slider and a change-up.

"Stock has good fastball movement and his cutters are effective," a Doosan official said, according to the Joongang Ilbo. "He should work well with Ariel Miranda, who has excellent ability to strike out players. Although Stock has mostly played in the bullpen, he has been preparing to enter the rotation since 2019. He will be able to eat up innings."

Doosan has already renewed its contract with Miranda, the reigning KBO MVP and the league's all-time single-season strikeout record holder. The Bears are yet to sign a foreign position player, although the club had indicated that it intended to try and re-sign slugger Jose Fernandez.

Aside from Doosan, the Kia Tigers are the only team yet to complete their foreign player roster, with one pitching spot still left open.