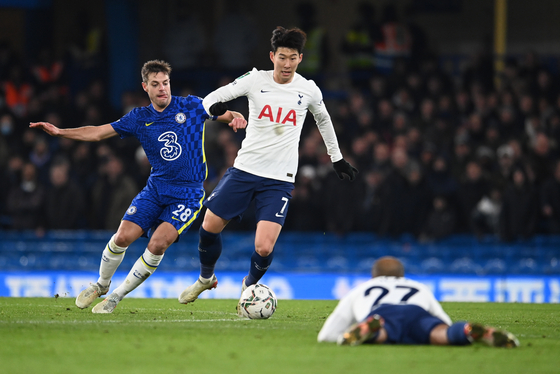 Tottenham Hotspur's Son Heung-min in action against Chelsea's Cesar Azpilicueta during a Carabao Cup semifinal match against Chelsea at Stamford Bridge in London on Wednesday. [EPA/YONHAP]


Tottenham Hotspur lost the first leg of their Carabao Cup semifinal against Chelsea 2-0 on Wednesday, setting up a difficult second leg at home next week.

Spurs fell behind just five minutes into the game, with ineffectual defense failing to stop the first real attack of the match and Kai Havertz converting via a Davinson Sanchez deflection to put the home side ahead.

That lead was doubled half an hour later, when Spurs defender Ben Davies headed the ball into the back of his own net, putting Chelsea two minutes up before half time.

At the other end of the pitch, Son Heung-min and the Tottenham offense proved largely ineffective. Crosses continued to be a problem for the north London club, with Son at one point shouting his frustration at Emerson Royal, who only managed to deliver five of his 14 crosses to a teammate during the game.

Son had a few more chances in the second half than the first, but was unable to do anything seriously threatening and was ultimately substituted for Giovani Lo Celso in 79th minute. Substitutions in general were also a problem for Antonio Conte, with the low number of healthy Tottenham players forcing the manager to include two goalkeepers on the bench, just to keep the numbers up.

Tottenham now face a huge challenge if they want to make it to the final of the Carabao Cup again this year. With Chelsea two goals up, Tottenham will have to score at least two goals to be in with a fighting chance in the second leg next week. Luckily for Spurs, the away goals rule does not apply in the Carabao Cup semifinals, meaning any goals Chelsea score next week won't carry any extra weight.

Speaking after the game, Conte made it clear that Chelsea have an obvious advantage in the competition.

“There’s an important gap, an important difference, there’s a big job to do to retrieve the situation,” Conte said after the game. “Last season Chelsea won the Champions League and this is enough to explain the difference between us and them. We need time, so much time, to retrieve the situation. You cannot do this in only six months or one year. They were much stronger than us. I do not see a solution in this transfer window.

“It was a difficult game, difficult from the start, Chelsea were much better but we are talking about one of the best teams in Europe, in the world. If you compare the two teams there is not a comparison."

Spurs will be back in action this weekend with an FA Cup game against Morecambe on Sunday, before facing Chelsea in the second leg of the Carabao Cup semifinal on Jan. 12.