Victon decides on sexiness over freshness for comeback EP

Victon decides on sexiness over freshness for comeback EP 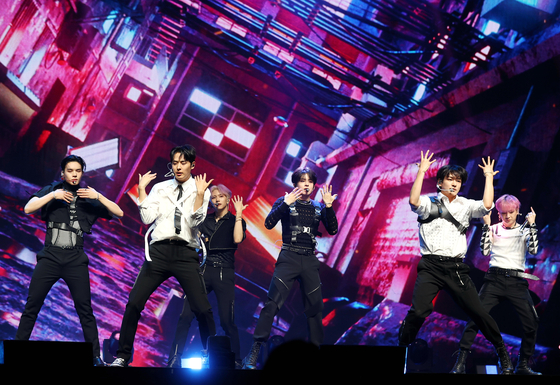 Victon made a speedy return to the K-pop scene, four months after its previous release. The boy band dropped its seventh EP “Chaos” on Monday with the lead track “Stupid O’clock.” The band marked its comeback with a showcase held on the same day at the Yes 24 Live Hall in eastern Seoul’s Gwangjin District.


The new EP is the second chapter of the “Time Trilogy,” which the boy band launched in January with the EP “Chronograph.”

Victon opened the showcase with a performance of its new track “Stay,” a summery song with a minimalistic guitar riff but a powerful vocal melody, then premiered the music video and stage performance of the EP’s lead track “Stupid O’clock.” The song is a dance number with addictive bass and synth sounds throughout.

According to Seungsik, reaching a consensus on what the lead track should be took a long debate among members.


“Actually, we couldn’t agree on one song at first,” he said. “We were torn, wondering if she should choose freshness or sexiness for our concept this time.”


“Since ‘Chronograph’ was on the fresher side, I cast my vote for the sexier ‘Stupid O’clock’ this time. 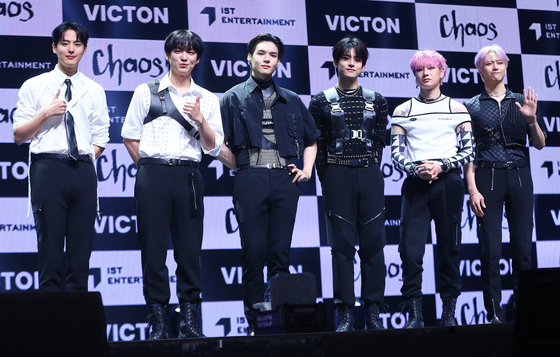 
Victon recently came back from Japan after holding a fan meet and concerts in Tokyo and Osaka.

“It was our first time meeting Japanese fans in three years,” said Chan. “It was so touching. Today is also our first in-person showcase since the Covid-19 pandemic. It’s been almost three years.”


“Half of the time since our debut, we were in a pandemic,” he added. “The thought of finally being able to hold a concert again makes my heart beat.”

Despite the pandemic, each member has been making the most out of their individual talents, reaching fans in various ways.

Byungchan has made himself familiar to K-drama lovers by appearing in popular television series — KBS’s period drama “The King’s Affection” and SBS’s romantic comedy “Business Proposal” (2022).


“I was able to show many different sides of me through those dramas,” said Byungchan. “Through my roles, I had to feel and show a lot of emotions that I had never felt before. It felt interesting and new, but portraying those emotions is still difficult. I’m slowly improving my acting skills.”


“Nothing has been decided for my next work, but if there’s a character I want to try portraying, it’s someone who has a crush or starts feeling the emotion of love,” Byungchan added. “In my late 20s, I feel like that would be a character that suits my age.


“I was glad to show not only fans, but also people who love photography, a different side of me,” said Sejun, “not just as a singer but also in another field of art. It was a very meaningful May for me. I had to choose 32 out of the 990 photos I had taken over the past year. I asked the members for advice a lot, since they all have such different aesthetic styles.”

Seungsik and Sejun are currently preparing for their roles in the upcoming production of the musical “Equal.”

“I used to think preparing for a Victon comeback and preparing for a musical would be two very different things,” Seungsik said. “But in the regard that many people have to communicate in order to produce a good performance, I felt that the two are very similar. What I learned while preparing for the musical was very useful when getting ready for this comeback.”


“We were able to go on all this times thanks to Alice,” said Byungchan, “and because us members give each other energy. We want to continue showing our best sides in the future, not only as a team but also through our various individual endeavors.”

[VIDEO] Victon decides on sexiness over freshness with "Stupid O'clock"