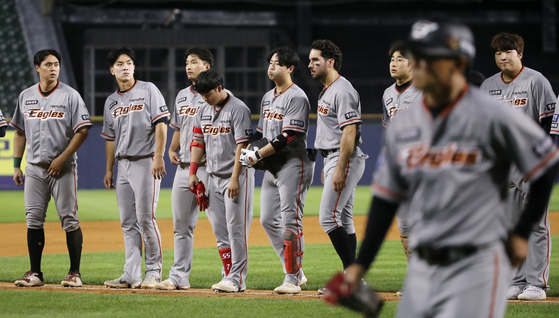 The Hanwha Eagles leave the field after losing to the LG Twins at Jamsil Baseball Stadium in southern Seoul on Tuesday. [NEWS1]


The Hanwha Eagles' years-long slump passed another grim milestone on Wednesday when the Daejeon club became the first team in KBO history to play three consecutive seasons with a double-digit losing streak.

The last-place Eagles on Wednesday lost a tight 6-5 game to the third-place LG Twins at Jamsil Baseball Stadium in southern Seoul, pushing their current losing streak to 10 games. The Eagles lost 10-4 to the Twins on Tuesday and had dropped their most recent series against the NC Dinos, Lotte Giants and SSG Landers.

Mixed into that losing streak was one tie on June 17, but unlike in football, a tie in baseball does not cut a winning or losing streak.

The last time the Eagles actually won a game, as of press time Wednesday, was on June 8, when they beat the Doosan Bears 5-1 at Jamsil.

That 10-game losing streak matches the Eagles' worst spell of the 2021 season, when they also dropped 10 games on the trot.

Far worse was the 2020 season, when the Eagles tied the KBO record for the longest-ever losing streak, at 18 games, joining the now-defunct Sammi Superstars for that ignoble honor. That run of bad form was dramatic enough to see manager Han Yong-duk fire half his coaching staff and then one day later resign himself, leaving the flailing club stuck with an interim manager in the middle of the season.

It also gave the Eagles the longest losing streak of the current KBO clubs. Among the clubs that are still active in the league, the Lotte Giants and the Kia Tigers have both had 16 game losing streaks, the Giants back in 2002 and the Tigers in 2010.

Adding to the Eagles' woes, the KBO on Tuesday handed down a 10-game ban on infielder Ha Ju-suk for inappropriate behavior in a game last week.

Ha also received a 3-million-won fine and was ordered to complete 40 hours of community service.

The KBO opened disciplinary proceedings against Ha, who also serves as the Eagles captain, following an incident in the eighth inning of the team's 3-0 loss to the Giants on Thursday last week.

While at bat at the bottom of the eighth, Ha disagreed with a strike call by home plate umpire Song Su-keun. Ha argued with Song but returned to bat, striking out swinging shortly afterwards. Following the out, Ha slammed his bat into the ground in frustration and was ejected from the game.

Ha continued to argue before being dragged off to the dugout. On the way off the field, he threw his helmet, which bounced off the wall and hit his own coach Darryl Kennedy in the back of the head.

It's not just the Eagles that are setting the wrong kind of records.

With no hits in the Lions' 6-0 loss to the Kiwoom Heroes at Daegu Samsung Lions Park in Daegu on Wednesday, Kim is now riding a hitless streak at 43 plate appearances, a new record for the Lions.

Kim is just eight plate appearances away from the longest dry spell in league history, at 51 plate appearances. Former SK Wyverns and Nexen Heroes manager Youm Kyoung-youb holds that particular record, having set it while playing with the Hyundai Unicorns in the mid 1990s.

Eagles continue rebuild after another year at the bottom