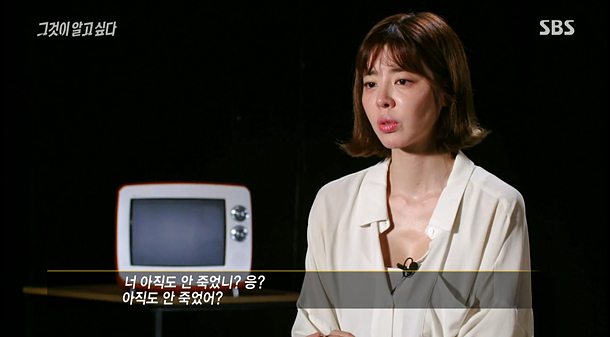 Kim Gyu-ri appeared on the Sept. 23 episode of “We want to know the truth” on SBS, discussing her life after 2008, when she was allegedly put on Lee Myung-bak administration’s cultural blacklist. The subtitles read, “Aren’t you dead yet? Huh? Aren’t you dead yet?” [SCREEN CAPTURE]

It’s common for actors and actresses to have nicknames, but such monikers are usually favorable, unlike actress Kim Gyu-ri’s nickname, “potassium cyanide,” which she earned after a post she uploaded in 2008 on her social media account.

Kim was alledgedly on former President Lee Myung-bak’s blacklist of cultural figures and celebrities critical of the government since 2008. The defamed actress, along with other celebrities who claim to have been put on the former president’s list, appeared on SBS channel’s “We want to know the truth” on Sept. 23.

The blacklist controversy is blowing up at the moment, and the latest episode of “We want to know the truth” delved into the existence of the Lee administration’s cultural blacklist, which “had specific plans to oust celebrities and cultural figures critical to the government,” according to the program.

“No program would call me and I even got kicked out of the programs I was supposed to be shooting,” said Kim Mi-hwa. “We’ve all been presuming what happened. We all assumed that something was happening somewhere. A lot of strange things have been happening for the past nine years.”

Kim Gyu-ri is one such actress who has suffered from the government’s intentions to hamper her entertainment career. Kim, who went by her birth name Kim Min-sun back then, debuted as a model in 1997, and appeared in her first movie in 1999, “Whispering Corridors 2: Memento Mori.”

She led the life of a top celebrity afterwards, with her name cast in numerous movies, TV shows and her face gracing the cover of magazines. That was, until 2008.

On April 18, 2008, shortly after taking office in February, Lee announced negotiations with the United States to import U.S. beef, which had been banned in 2003 after a cow in the United States was found to have bovine spongiform encephalopathy (BSE), or mad cow disease. A total of one million citizens took to the streets over the course of three months, holding candlelight protests in central Seoul’s Gwanghwamun Square, demanding the government’s decision be reversed.

It was during one of those days on May 1, 2008, that Kim wrote on her social media account: “Soon, we will have U.S. beef even as the whole world shuns it … even the bones. This is just ridiculous … This couldn’t happen even in L.A. Importing beef and bones smothered with mad cow disease … I would rather fill my mouth with potassium cyanide.”

While Kim’s words were welcomed by those who opposed U.S. beef imports, she was harshly criticized by conservatives and even centrists. She was berated even by her fans when a footage of her eating a beef burger in the United States in March 2008 was revealed. Wherever she went, she was called “potassium cyanide,” and internet comments were always asking, “haven’t you filled your mouth with potassium cyanide yet?”

“The comments were always asking me, ‘aren’t you dead yet?’ and telling me to die,” said Kim. “So I tried to die. I went to the charnel house to see my mom the other day, and people were swearing at me there. But all I did was go and see my mom.” After the show, Kim admitted that what she wrote 10 years ago was something she did when she “was young and didn’t know well,” on a post she uploaded on Instagram on Sept. 24. The actress pleaded that she had been suffering for 10 years and that it’s time for people to stop.

Kim changed her name from Min-sun to Gyu-ri on November 2009, and said the reason she did so was because she “had always been called by the two names at home, and it was confusing.”

Nevertheless, the public saw the gesture as a way to escape her past as Kim Min-sun, “potassium cyanide,” and the name still followed afterwards.

Another factor that angered people was that there was already a “Kim Gyu-ri” in the entertainment field, who appeared first on the “Whispering Corridors” series in 1998. 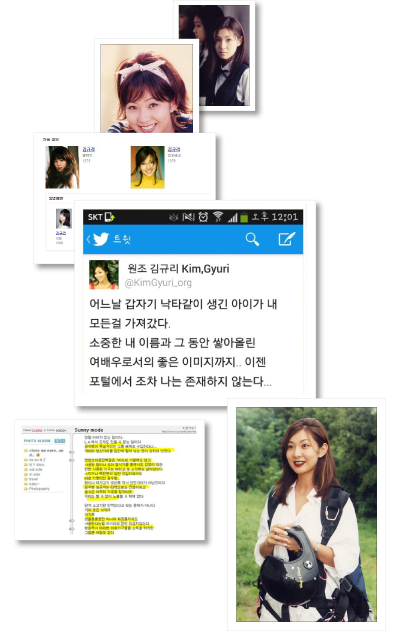 Even though the original Kim Gyu-ri debuted first and was much more popular in the early 2000s, she suddenly became forgotten as another Kim Gyu-ri took over. Now, when people look for Kim Gyu-ri on the internet, all they get is the news of the person who used to be called Kim Min-sun.

“A girl who looks like a camel came out of nowhere and took everything,” wrote the original Kim Gyu-ri on her Twitter account on Sept. 23 after the episode of the “We want to know the truth” was aired. “My name and even my good reputation as an actress… Now I don’t even exist on the portal anymore…”