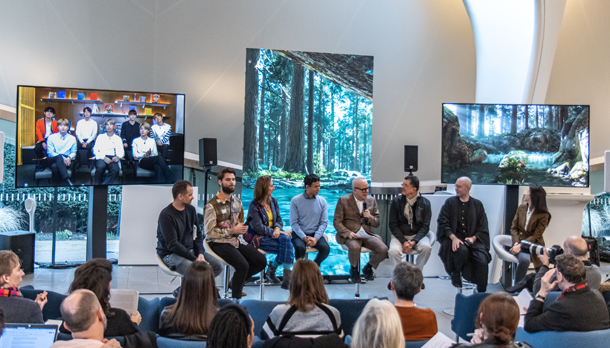 LONDON - The Serpentine Galleries, a prestigious venue for contemporary art located in Hyde Park, central London, unexpectedly showed a livestream of K-pop superstar BTS giving a message on Tuesday morning. They said, “It is a great honor to participate in ‘CONNECT, BTS’ with such renowned artists and curators from all over the world.”

The art project titled “CONNECT, BTS” is a series of exhibitions in five cities on four continents that is free to the public. It is not a project in which BTS creates visual artworks or where artists present works inspired by BTS. Instead, “this project is a series of exhibitions created by artists and curators who share BTS’s philosophy in the form of support for diversity and love and care for the periphery,” Lee Dae-hyung, who developed the art project and is working as one of the co-curators, said.

First, in London, Danish artist Jakob Kudsk Steensen is presenting “Catharsis,” an immersive audio-video work that portrays a digital simulation of a re-imagined old-growth forest at the Serpentine Galleries. The work will be on view until March 15. Beginning Wednesday in Berlin, the prestigious contemporary art exhibition hall Gropius Bau will present “Rituals of Care,” a series of performance works by 17 artists from around the world, including Nigerian artist Jelili Atiku and American artist boychild. Curated by Stephanie Rosenthal, director of Gropius Bau, and curator Noemie Solomon, the interdisciplinary performance program in the venue touches on the historical contexts of World War II and the Cold War and will explore “what we can learn from the history and the healing practices of art,” Rosenthal told the press at the Serpentine Galleries. It will run until Feb 2.

The Argentinian multidisciplinary artist and architect Tomas Saraceno will present “Fly with Aerocene Pacha.” For the first time in history, a human being will float into the sky in an “aerocene,” a vehicle developed by the artist in cooperation with scientists and powered only by the sun and air, without fossil fuels, solar panels, batteries or helium. “My works are [based] on the idea that not only humans but also all creatures are the same passengers of planet Earth, and they are connected with each other. In this context, I am happy to participate in this exhibition and thank BTS,” Saraceno said in the press briefing. “Aerocene Pacha” will launch at the Salinas Grandes, Argentina’s great salt lake. The resulting film will be shown in Buenos Aires from Jan. 21 to March 22.

Seoul’s landmark Dongdaemun Design Plaza designed by legendary architect Zaha Hadid will be the location for two exhibitions from Jan. 28 to March 20: British-born artist Ann Veronica Janssens will present “Green, Yellow, Pink,” an installation of a mysterious sensory environment in which a haze of colored artificial mist gives sculptural form to light. Korean artist Yiyun Kang will present “Beyond the Scene,” a digital environment on a large scale, a reimagining of BTS’s signature dance movements as seen through the techniques of projection mapping. 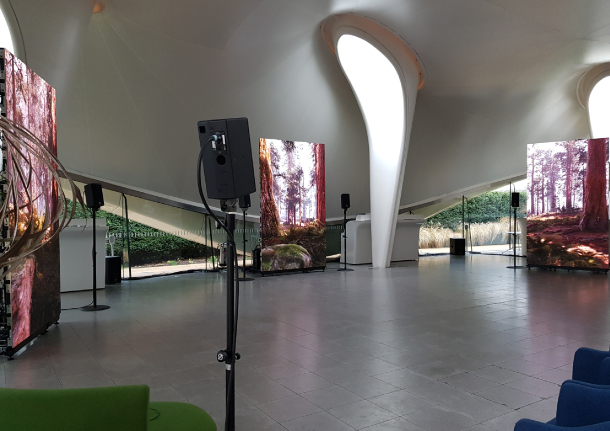 New York City’s Brooklyn Bridge Park Pier 3 will be the site of an installation of a vast “drawing in space” by Gormley, the artist said. The work “New York Clearing” is a single line made up of 18 kilometers (11 miles) of square aluminum tubing that loops and coils without a beginning or end, turning itself into “an environment, space our bodies engage in and lines of energy,” the artist said during the press briefing. It will be on view from Feb. 4 to March 27.

BTS member Jin said, “We speak different languages and come from multiple cultural backgrounds and have lived through unique life experiences. Contemporary art and music are also two different worlds. This project is especially meaningful to us because it truly represents diversity and creates a collective, positive message for the world that we value.”

Member J-Hope said, “Through this project, we hope to return the great amount of love and support [we have received] from our fans, ARMY, and all audiences.”

“We see major challenges in the 21st century - challenges such as the extinction crisis and ecological crisis, as well as the crisis of inequality in human society,” Obrist, director of the Serpentine Galleries, said. “To solve the problems, we need to bring different fields like art, science and technology together. The Serpentine, a very interdisciplinary organization, has been focusing on connecting them, so I was very happy when Dae-hyung proposed this project to us, because the concept of ‘Connect’ is also our philosophy here.”

He said BTS’s large number of fans will help connect contemporary art with more people so that the challenges can be solved together, adding, “It’s great to see that the BTS members are interested in art - not only interested, but [have a] passion for art.”

RM of BTS said, “Personally, I became a big fan of what is called fine art or visual art… Although some people say art cannot change the world, I believe art can change the world.”

Visitors to the exhibitions will be able to access special artwork introduction videos recorded by BTS. These clips can be accessed via the official “CONNECT, BTS” website (www.connect-bts.com).