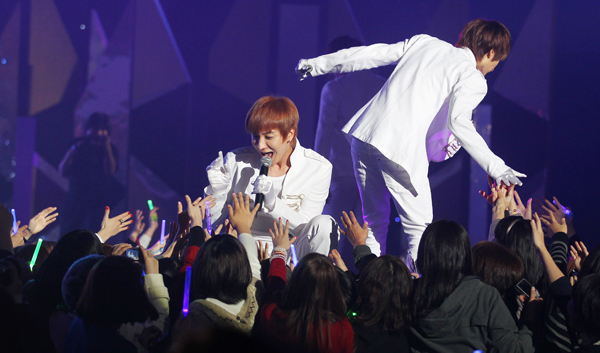 
Boy band Super Junior has proven yet again just how popular it is overseas. At the band's two-day concert in Singapore on Feb. 18 to 19, more than 16,000 fans came to cheer on their favorite Korean band.

"Super Show 4," which took place at the Singapore Indoor Stadium, was a part of the band's world tour. The tour kicked off in Seoul last November, and Singapore was the fourth leg of the tour after Osaka and Taiwan.

The show was jam-packed full of the band's biggest hits such as "Mr. Simple" and "Sorry Sorry."

In addition, each member performed solo acts, to the delight of fans. Yesung sung the hit "One Man" by singer Kim Jong-kook while the comedian of the band, Shindong, danced to the songs "Trouble Maker" and "Bubble Pop" by female idol singer Hyun-A.

Meanwhile, the fans wowed the boy band by singing along to the songs in Korean.

On Feb. 19, the band attended a press conference with local media such as Lianhe Wanbao, iWeekly and XINMSN to interview the Korean act that is a huge success in Singapore.