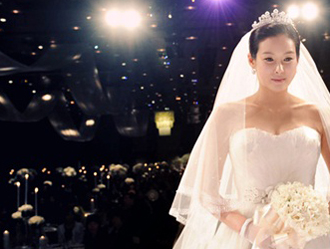 In the latest of what has been a rapid-fire succession of startling announcements about entertainer Hyeun Young’s personal life, some entertainment media have begun to speculate that she is three months pregnant.

Much to the surprise of fans, Hyeun Young’s agency announced in early January that she had been dating a banker for months. And though the agency denied any plans of a wedding, it announced just weeks later that the two decided to marry, setting the date for March 3.

The pregnancy speculation arose on the day of the wedding, shortly after the entertainer held a press conference before officially tying the knot.

When asked if she planned to have children, the actress replied, “My husband is in his 40s, and I’m also no spring chicken, so we plan have them soon.”

The star’s agency has not confirmed or denied the rumor, simply saying it does not know if Hyeun Young is carrying a child.

“We checked with her manager, and he said he didn’t know. As she is currently on her honeymoon, we won’t be able to confirm any details at this time,” the agency told internet news Web site TV Report on March 5.

The new bride will be out of reach until she returns from Hawaii, the agency added.