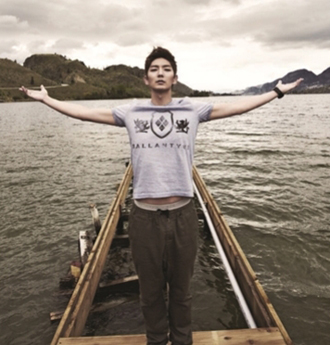 Actor Lee Joon-gi revealed pictures from his recent trip to Canada, just months after being discharged from the Army.

Shots of Lee’s downtime in British Columbia can be seen in the June edition of beauty and lifestyle magazine Allure Korea.

Lee also said he was pumped for his new project, the drama “Arang and the Magistrate,” in which he will star opposite actress Shin Min-a.

“During my time in the military, I was inspired by the works of my peers,” Lee said. “Thus I will bring a profound sense of zeal and passion toward my new work.”

The Hallyu entertainer said he didn’t take his fame for granted.

“It’s such a privilege to have a fan base and support of this scale as an actor. I feel so blessed.”

Back in April, Lee proved that he had more than acting and good looks going for him when his Japanese single made it onto Oricon’s weekly top-10 chart. The single “Deucer” was released in Japan on March 15 and was the No. 1 song on numerous charts. By Carla Sunwoo