Baek Ji-young in a modern day Romeo and Juliet tale, sort of

Baek Ji-young in a modern day Romeo and Juliet tale, sort of 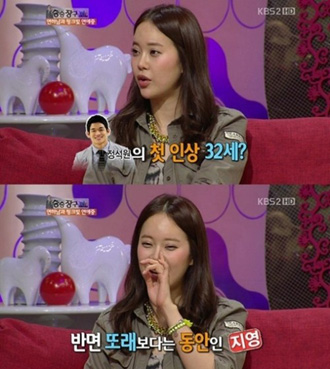 Singer Baek Ji-young revealed on an episode of KBS 2TV’s “Win Win” that she and her actor boyfriend Jung Suk-won started off their relationship with much discontent from parents on both sides.
On the TV show that aired on May 22, Baek said that due to her being nine years Jung’s senior, initially the couple’s families were against the relationship.

“My parents thought it’d never last due to the age thing. Of course now, they love him,” said Baek.
When asked how Jung’s family felt toward the singer, Baek said, “I think they are fine with it now.”
Initially they were against the pair, “You know if I had a son and he started dating a woman who was nine years older, I don’t think I’d be crazy about it either,” Baek said.

Despite the initial hostility, Baek said that she gave it her best and even began transforming herself by “Wearing less flashy outfits, making sure I wasn’t wearing too much make-up both on and off the camera.”
She said that although she’s met Jung’s dad, she has yet to meet his mother.
By Carla Sunwoo [carlasunwoo@joongang.co.kr]