2NE1 says it will “change the world”

2NE1 says it will “change the world” 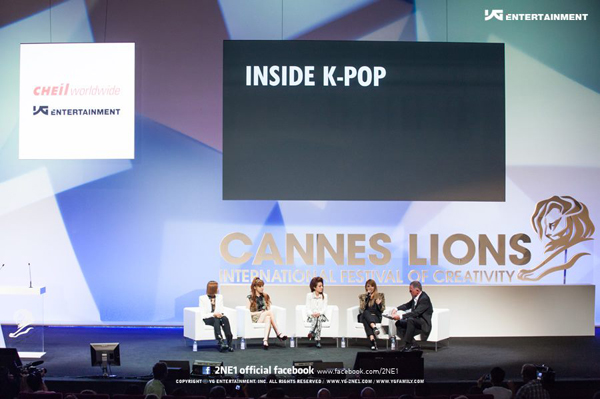 
Girl group 2NE1 shared the secret of its success at a seminar titled “Digital Hallyu Marketing” taking place at the 2012 Cannes Lions International Advertising Festival in the south of France.

At the seminar, which took place on June 18 at the Claude Debussy Hall, the band said that it owed much of its success to the digital age.
“Through YouTube, our fans worldwide began learning our songs in Korean and making cover versions themselves. The digital environment blurs the boundaries of nations and makes it easy to unite us,” said CL.

When asked about why they were so popular, the girls said that it could be attributed to their passion.
“Koreans have a lot of energy and passion toward music. You can see all this in our music videos, at our concerts and in our songs. I think that’s why our fans love us.”
The group added that with the aid of technology and the power of K-pop, it would “change the world.”

Some other famous attendees at the seminar were Bill Clinton, Sebastian Coe, who is the chairman of the London Olympic Committee and Trevor Edwards, vice chairman of Nike.
By Carla Sunwoo [carlasunwoo@joongang.co.kr]