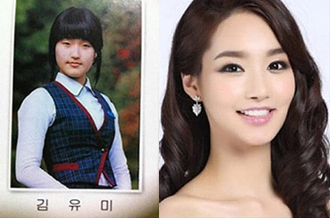 The beauty pageant winner Kim Yu-mi, who won the title of Miss Korea early July, has confessed that she wasn’t gifted with natural beauty.
On a tvN’s entertainment show on July 18, Kim Yu-mi spoke out about the scandal which unfolded when an old photo of her circulated online after her win.
In her yearbook photo --uploaded by one of her peers-- Kim has a remarkably different look with no doubt that the beauty queen had gone under the knife since her school days.

“I had a feeling that my pictures from the past would surface,” said Kim.
“But I was shocked that the papers made it out like I claimed to have been a natural beauty. I never once said that I was born beautiful,” said the 21-year-old film major at Konkuk University.

Kim added that she understands that people would be disappointed about the revelation, but having had work done was not something she wanted to hide anyway.
“From now on, I hope to make a name for myself for my inner beauty rather than my outer beauty,” said Kim.