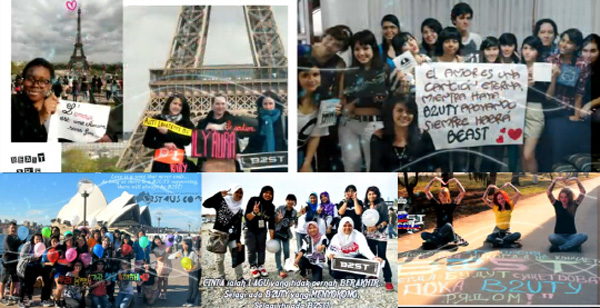 
Some 350,000 fans of Beast, belonging to the official fan club “Beauty,” have shown their support for the K-pop band in an unusual way.
To mark the group’s EP “Beautiful Night” released on July 22, fans from around the globe, including Mexico, France and Brazil, have uploaded congratulatory messages for the band at landmark sights from their home countries.

Videos came from all over Asia, Europe and South America; and according to Cube Entertainment, more than 300 videos were posted on the day the group’s fifth EP was launched.

“It’s amazing what happens when new technology and true fandom meet,” said Hong Seung-sung from Beast’s agency.
“We will be forever striving to come out with new ideas to please the fans worldwide,” said Hong.
By Carla Sunwoo [carlasunwoo@joongang.co.kr]