Cha Tae-hyun says he only had one girlfriend

Cha Tae-hyun says he only had one girlfriend 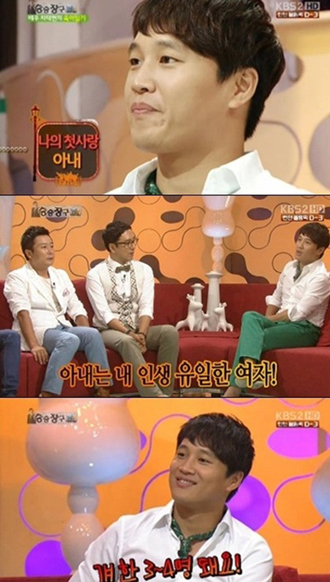 Actor Cha Tae-hyun announced on KBS 2TV’s talk show program “Win Win,” that he had only dated one girl, who is now his wife.
On the show that aired on July 24, Cha said that he met his wife when he was in second year of high school.

“I’m sure that she’s dated other guys,” said Cha, “but not me. She’s the only girl I’ve ever dated.”

Cha said that his wife was his first love, but after dating in high school, they broke up, a gap period which Cha’s wife used diligently, while Cha didn’t.
“After we broke up, I think she dated about three or four other guys,” guessed Cha.

To confirm the details of his wife’s past loves, the hosts of the show called up Cha’s wife Choi Suk-eun who said that she did indeed date other guys, “but it wasn’t serious.”

“If I had the choice to go back in time, I’d still marry him,” said Choi, reaffirming her love for her husband.

“You know people see me as this romantic guy because I married my high school sweetheart,” Cha explained, “but the thing is I really had no other options.”