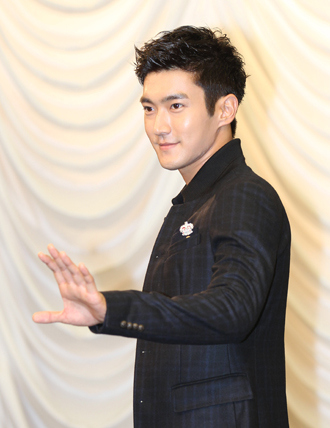 Super Junior’s Kyuhyun, co-host of the show “Radio Star,” seemed a little nervous when his band members were guests on the hit MBC show Wednesday night.

The joke of the night was how much Siwon would steal Kyuhyun’s thunder by being present. The regulars on the show spent most of the time comparing Siwon, recognized by the Korean public as the best looking member with lineage to match his good looks.

Although Siwon was less than impressed when his band members joked that Siwon “had it all,” the boy band member said he wasn’t interested in inheriting his entrepreneur father’s business. The 25-year-old said that “as an actor and singer,” he still had a lot of goals.

While he didn’t go on to reveal what they were, Siwon also maintained that he had no interest in dabbling in his father’s business.

Much to Kyuhyun’s horror, Siwon also said that he coveted his band member’s job as a regular on the hit TV talk show.

Other band members that took part in the show were Shindong, Eunhyuk and Leeteuk.