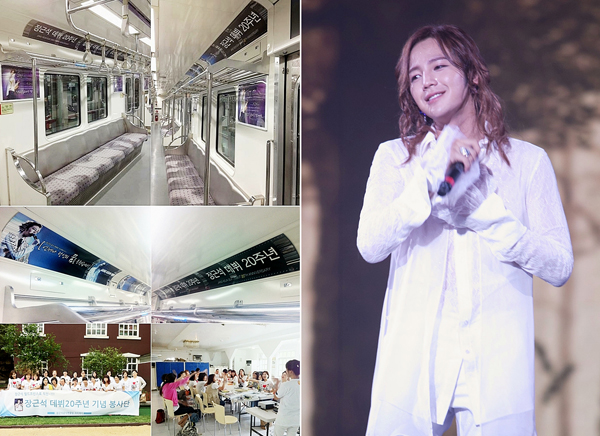 Starting Sunday, commuters and travelers on metro line No. 5 might have been surprised to see Hallyu entertainer Jang Keun-suk’s face in the unlikeliest places.

More than 258 posters of Jang in four different sizes were placed on one train to mark Jang’s 20th year in the industry.

The ads were dispersed throughout the train’s eight compartments by Jang’s fan club, Cri J.

The ads carry a message of support and contain a poem recited by Jang during his Japanese concert earlier this year.

The fanfare for the artist known as “The Prince of Asia” will be on display until Oct. 10. According to Tree J Company, fans chose this time to mark Jang’s birthday on Sept. 26.

Seoul Metro said it has been flooded with calls from fans who want to know when the “Jang Keun-suk train” will be operating.

Cri J also announced that they won’t stop at just the metro, but will also stage a volunteer event in honor of Jang, who is in the middle of an Asian tour.