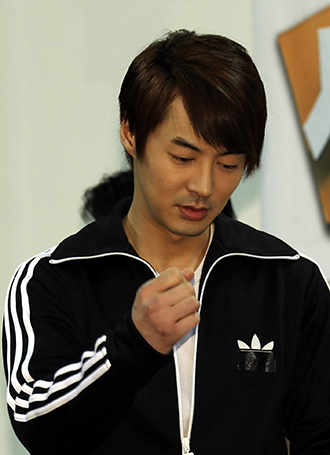 On a KBS morning show, Shinhwa member Jun Jin’s father, former back-up dancer Charlie Park talked about a time when he wanted to sever ties with his entertainer son.

“One time, he ran away from home and I was furious,” said Park on the talk program, which aired on Oct. 9.
“So I trailed his friends, found him and told him then and there that if he ever ran away from home again that I’d cut him off,” revealed Park.

Despite his anger towards his teen-aged son, Park did say that there was a time when he felt sorry toward his son.
As Park split with his first wife — Jun’s biological mother — when Jun was a baby, he said that his son was a miserable child.

“I raised him alone until he was five and every time we’d pass kids holding their mom’s hands, he’d keep staring,” said Park who decided he should find a mother for his son as quick as possible. To date, he’s had three wives.

Jun had previously talked about missing his mother to a degree that he wanted to become famous so that he could find her.