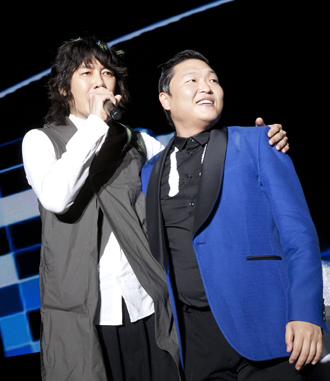 Kim Jang-hoon, who had a falling out with his old friend Psy, joins the “Gangnam Style” phenom for a surprise duet Wednesday at the Shilla Hotel in central Seoul. [YONHAP]

Psy wins some, loses some and gets more mentions.

The last 48 hours have been crazy for Psy, whose head probably hasn’t stopped spinning for the last few months.

First came his reconciliation with longtime friend Kim Jang-hoon, who garnered some negative press for Psy of late by attributing his suicide attempt to the star of “Gangnam Style.”

Then came the announcement that his single remained No. 2 under Maroon 5 on the Billboard chart in the United States.

He was also given props by the Korean Culture and Information Service for his contributions to promoting his homeland.

On Wednesday, Psy was performing in Mercedes-Benz’s “Night of the Stars” concert in the Shilla Hotel to celebrate the F1 Korean Grand Prix.

While performing “Paradise,” he was surprised by Kim, who got on stage and the two launched into a duet.

After the song, Kim, who had blasted Psy for stealing his dance moves and concert routine through the Me2Day social network service, publicly apologized. “I realized I was getting in the way of my beloved friend’s success,” he said, referring to his singling out Psy as a “betrayer.”

On Oct. 5, Kim not only called Psy a copycat, but attempted suicide by overdosing on sleeping pills after confessing to netizens that he couldn’t deal with the anguish.

Kim asked for Psy’s forgiveness before the two celebrated by chugging some soju, “one shot style.”

The two had been friends for a long time, and Psy often declared his admiration for Kim, stating time and time again that he had learned a lot of Kim’s moves and adopted them as his own.

Yesterday, Kim took to his Me2Day page, as he often does, to offer a full explanation.

“I feel as if I was born again,” said Kim, adding that he had slept without the aid of narcotics, “a first in a very long time.”

“I just thought back to all the times we spent together when I visited him at the Army on public holidays and also I wanted to wish him well with all the foreign media focusing on him,” Kim explained, showing a drastic change of heart since the weekend when he called Psy’s visit to his sickbed a publicity ploy.

With his private matters sorted out, Psy and all of his fans were looking forward to the Billboard results that came out yesterday. But they showed Psy was again No. 2 behind Maroon 5’s “One More Night,” despite the fact that “Gangnam Style” has chalked up more than 400 million YouTube views since July 15.

Billboard commented on the fierce battle between the American group and South Korean singer, saying it was the smallest gap between No. 1 and No. 2 since February.

Referring to a comment made by Psy that he’d dance topless if he topped the esteemed chart, Billboard joked, “Well, look on the bright side; it is getting a bit chilly outside to go shirtless, anyway.”

Just 700 points separated the top two songs, and “One More Night” secured the top spot for its significant advantage of radio plays in the United States.

“The radio life of ‘Style’ is still in its earlier stages,” noted Billboard.

Despite the disappointment, Psy could claim another victory, as the Korean Culture and Information Service has applauded the rapper for increasing awareness of South Korea.

Through its YouTube channel, the organization said it attracted more than 10 million plus hits within a week of uploading the video documenting Psy’s free concert, which took place Oct. 4.

Although it has a way to go to reach 400 million, the four-minute clip is becoming one of the organization’s best marketing tools.