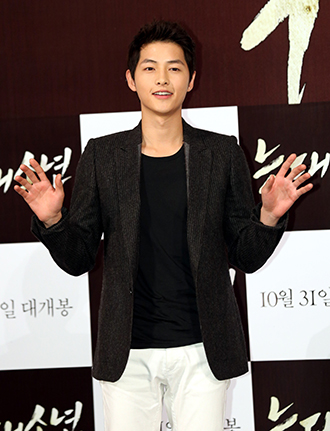 Star of current drama “Innocent Man,” Song Joong-ki has shown that he’s a nice guy, yet again, by donating some 200 kilograms (440 pounds) of rice to the needy.
Bags of rice were given to him by fans and delivered to the site of his press conference for the movie “Werewolf Boy” on Oct. 15.

Last year, Song also donated his time to the sick by spending time with young leukemia patients and their families.
Back in September too, Song received 100 kilograms of rice from fans for the launch of his recent drama, which he donated to the Korean Childhood Leukemia Foundation.
By Carla Sunwoo [carlasunwoo@joongang.co.kr]