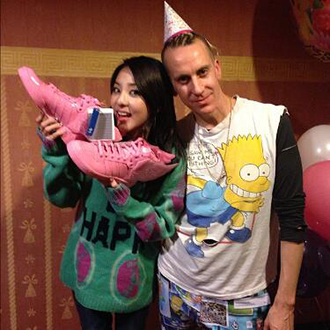 Through Twitter, Scott made it known that he gave the birthday girl some “custom pink patent leather wings 2.0.”

He also uploaded a picture of himself and Park with the shoes as well as other members, all celebrating Park’s birthday.

Netizens were quick to comment on the present, many gushing over the unusual shoes.

Meanwhile, Scott and 2NE1 collaborated on the “New Evolution” tour earlier in the year. Scott designed the outfits for the Hallyu girl group known for its eclectic style.