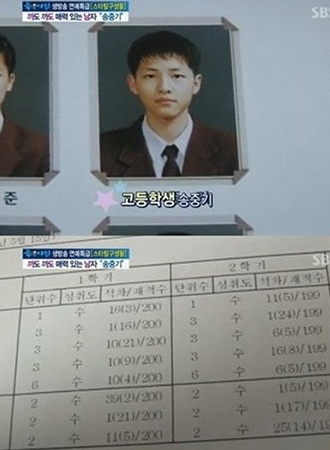 In the show, Song’s attendance and exceptional report cards were revealed: he received the highest grades for all subjects.

As it is already known that Song was a model student back in school, it was no surprise, but netizens commented on the Hallyu star’s academic record nevertheless, calling him a “perfect all-rounder” among other things.
Song scored 380 points out of 400 on his national college entrance exam and is currently enrolled at Sungkyukwan University.
By Carla Sunwoo [carlasunwoo@joongang.co.kr]