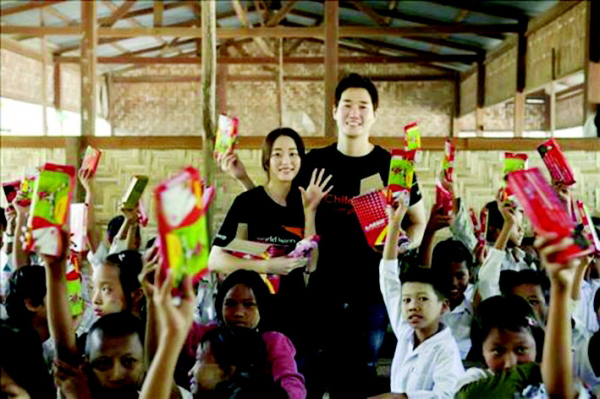 
Actor couple Yoo Ji-tae and Kim Hyo-jin set off to Myanmar for their first anniversary. The trip wasn’t luxurious though, but a volunteer visit with World Vision.

Namoo Actors announced on Dec. 5 that the couple visited a school in Myanmar which was established with monetary gifts collected at the two’s wedding last year.

“It was such an honor to see the kids studying in the classrooms that we helped build,” said Yoo, who turned up at the facility with stationery items for the children.

“I was so excited that I couldn’t sleep the night before,” said Kim, who said she was touched by the smiles on the students’ faces.

Even before they got together, Yoo and Kim were ambassadors for World Vision. Kim’s stint with the world aid organization dates back some four years.

As a couple, they are known to be one of the most generous Hallyu pairs and are involved in many causes.