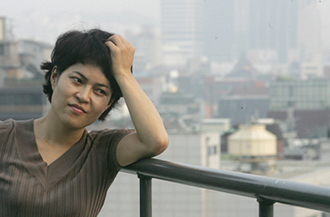 
Korean comedian Cho Hae-ryun confessed on an entertainment show slated to be aired on Sunday that she invested over 200 million won ($185,000) in stocks at the recommendation of another celebrity, but ended up losing the money when the stock was delisted.

She said this happened while she was working on the show “Yeogeol Six.”

She added that the celebrity who convinced her to invest was another member of the cast on the show, triggering much speculation among Korean netizens.

The host of the show tried to find out who the celebrity was, saying that there was a rumor that “one of the members of Yeogeol Six got slapped on the face by another member.”

Cho said, “Yes, I did it.” However, as speculation built up as to who she slapped, the producers of the show later clarified that Cho was “joking.”

The 42-year-old comedian is quite successful in Korea and also worked to make a name for herself in the Japanese entertainment industry.