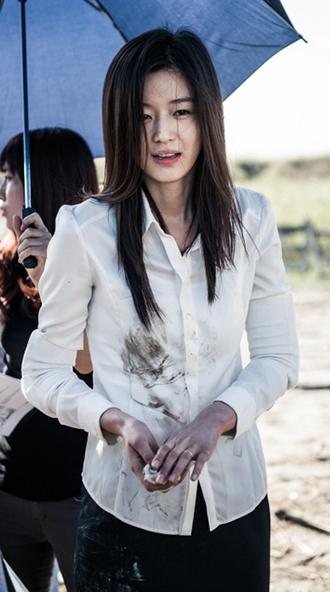 Jun Ji-hyun’s work ethic is the talk of the town after a staff member on the set of her upcoming movie “The Berlin File” revealed an injury sustained during a shoot.

A movie representative said that while filming an action scene, the actress was hit in the face with an empty cartridge and shards were lodged into her skin.

“There were some really intense scenes in the film and despite her injury, Jun just carried on with filming after getting the fragments removed,” said the spokesperson. The film’s director Ryu Seung-wan was also impressed by his lead actress.

“Jun has shot so many action films that she’s just a pro at it now. She’s especially good with wires,” said the director, adding that he now knows why she was cast in last year’s hit film “The Thieves.” Based in Berlin, Jun’s latest movie is a spy action drama about secret agents who have become each others’ targets in order to survive. It stars Ha Jung-woo, Han Suk-kyu and Ryu Seung-bum along with Jun.

It opens Jan. 31 and is Jun’s second cinematic work since she got married in April last year.
By Carla Sunwoo