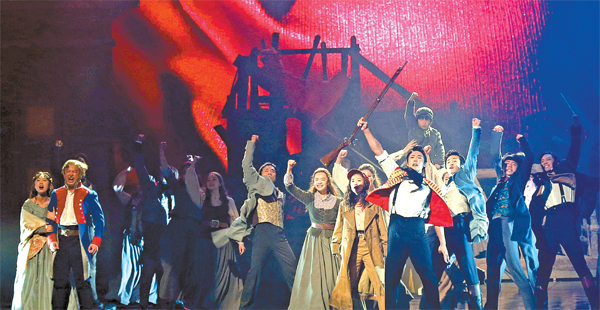 Actors for the Korean production of “Les Miserables” sing “One Day More” to celebrate receiving the Musical of the Year Award at the 7th Musical Awards, which were held at the National Theater of Korea in central Seoul on Monday. The musical also landed the Best Actor Award and Best Supporting Actor Award as well as two others. Provided by the organizer

They deserve “one day more” to party for taking home five awards at the 7th Musical Awards - Korea’s version of the Tonys - on Monday evening at the National Theater of Korea in central Seoul.

The two hosts, actor Yoo Joon-sang and girl group member turned musical actress Oak Joo-hyun, called the team of the Korean production of “Les Miserables” to the stage and offered such praise. About 50 members of the cast and crew joined in singing “One Day More” to celebrate their victory while the audience gave a standing ovation.

Hosted by the JoongAng Ilbo, JTBC and the Korean Musical Theater Association, 15 musicals, including creative musicals and foreign licensed musicals, vied for the top spots in 18 categories. The awards ceremony was aired live on JTBC.

The Korean production of the musical “Les Miserables,” based on a French historical novel, began its national tour in November in Yongin, Gyeonggi. It stopped in cities including Daegu and Busan, and since April, has been attracting musical fans in Seoul.

The huge success of the film “Les Miserables,” featuring Hugh Jackman, Russell Crowe and Anne Hathaway, gave a boost to the musical as well. At last count, the film was seen by 5.9 million viewers in the country. The Broadway team for “Les Miserables” visited Korea in 1996 and 2002, but the most recent production was the first Korean version.

The musical’s “excellent direction” and “grand stage design” were put in the spotlight at the Musical Awards. Comedian-turned-musical actor Chung Sung-hwa, 38, who played the coveted role of Jean Valjean, was honored with the Best Leading Actor Award, while Moon Jong-won who played Javert, and Park Ji-yeon, who played Eponine, took home the Best Supporting Actor Award and Rookie Actress of the Year Award, respectively. 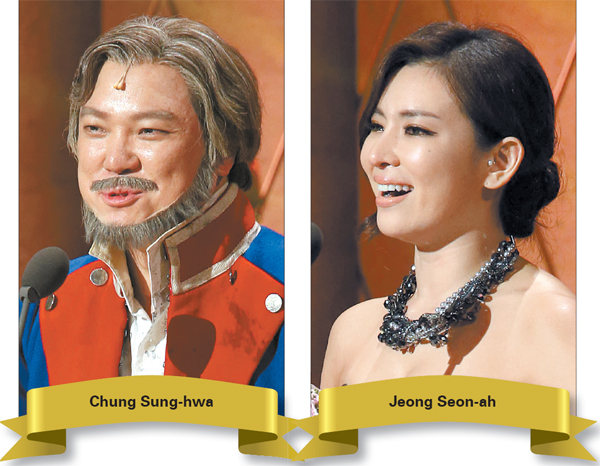 “I have often told people to have faith in me [as a musical actor],” Chung said as he received the award. “I faced a lot of prejudice, doubt and difficulties, but all that must have taught me something as I’m standing here right now. I want to offer hope for those who are thinking that it is too late for them to start in the musical business. I started at the age of 29.”

He didn’t forget to thank the ensemble, saying that is it a must-have for a “great musical.”

Meanwhile, next to “Les Miserables,” “Rebecca” earned its share of the spotlight. It also received five awards, including Best Stage, Best Lighting Design and Best Sound.

The German-language musical, based on a novel of the same name, was written by Michael Kunze and Sylvester Levay, who also wrote musicals such as “Elisabeth,” “Mozart!” and “Marie Antoinette.” The Korean version of the musical kicked off early this year under the direction of Robert Johanson.

When this production of “Rebecca” was first staged in Seoul, the two authors came to watch the show and “they highly praised the Korean production,” saying that “the company was able to really realize all the nuances of their intention,” according to Johanson.

As for the Best Actress Award, Jeong Seon-ah, who crafted a delightful comic performance as Amneris in “Aida,” took home the honor.

“I’ve dreamed of becoming a musical actress since I was a middle school student,” she said. “I wasn’t much of a great singer, but with my passion, I have reached this point. I thank all the staff, who are only passionate about musicals and push aside the money and honor, for making this day.”

Marking its seventh year, the Musical Awards went through a couple of changes since last year.

Instead presenting separate best musical awards - one for a licensed performance and another for a Korean-made “creative musical” - the organizers selected one Best Musical of the Year out of all candidates and also selected a top creative musical.

Moreover, the final voting after nominations was done by 60 culture reporters and 40 musical industry officials in an “effort to rule out any political considerations,” according to the organizers.

The award for top creative musical went to “The Days,” which features songs inspired by the work of legendary folk singer Kim Kwang-seok.