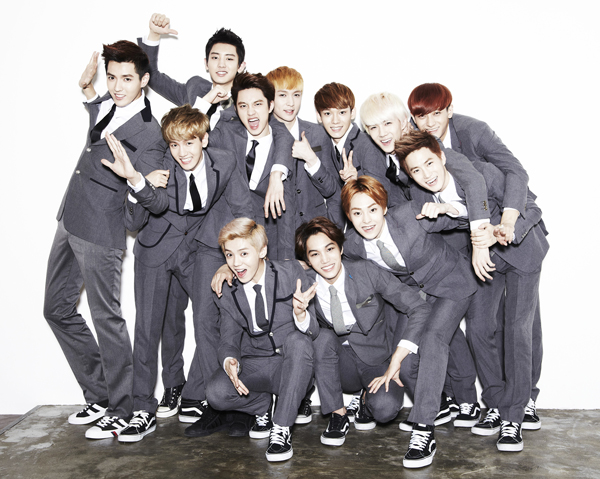 The 12 members of EXO, a new SM Entertainment boy band, pose in a promotional photo for “Wolf,” the title song of their album. [JoongAng Ilbo]

K-pop fans now have another reason to get excited: a new boy band called EXO.

The 12-member group has been working in two subunits - EXO M and EXO K - since last year but has finally reunited to present itself as a whole early this month.

The group’s first album includes the title song, “Wolf,” which sold 300,000 copies via preorder even before the official release date. It has been ranked No. 1 on album sales charts for two consecutive weeks.

“Our dream is to place on top in music programs,” the band’s members told the JoongAng Ilbo, an affiliate of the Korea JoongAng Daily, on June 12.

Their dream soon came true when the group came out on top on KBS’s “Music Bank,” SBS’s “Popular Song” and MBC’s “Show! Music Core” in mid-June thanks to endless attention from fans as the boys push their way up local music charts.

Fans have long awaited the unification of the groups. Since the members’ debuts at SM Entertainment over 100 days in 2011, six members formed two separate groups to debut in China and Korea.

EXO M, which includes four Chinese members, debuted in China, while EXO K focused on Korea. They debuted on the same day.

The strategy helped the group avoid any criticism in China over expanding Hallyu.

“EXO M has been trying hard to be recognized as a local group,” said Chris, one of the members.

The most eye-catching part in the group’s first album is the performance, not the music. The coordinated dance moves by 12 boys follow in the tradition of SM Entertainment, known for its intense, synchronized training.

“We are a group that focuses on performance,” said Suho. “I liked the title song because it can show our performance skills very well, and I was satisfied we had the choreography to maximize on our strengths.”

Xiumin said the reason he chose SM was because the agency focuses on presenting performances rather than just music.

The agency has also tried to create a kind of myth surrounding the arrival of the new group, as it named for the term “exoplanet,” meaning outside the solar system.

Although members said that the stories are fictional, they called them a good starting point from which they could attract fans’ interest.

They also revealed their hopes to stay in the entertainment industry for a long time. “[I] want to be on a global stage and go as far as [I] can as a singer,” said Chen.