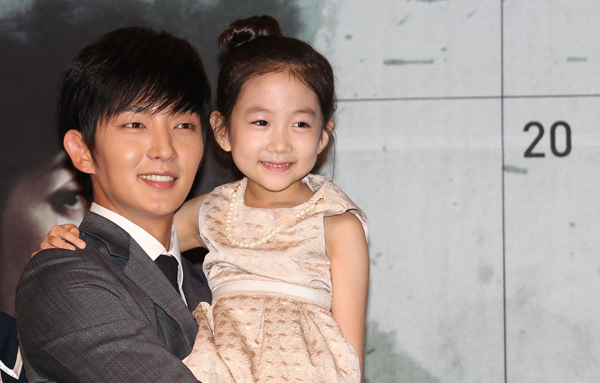 Actor Lee Joon-gi, who became hugely famous in 2005 thanks to the movie “The King and the Clown,” has become the talk of the town recently for his role in the new MBC drama “2 Weeks.”

Critics and fans are divided over the role, which has Lee playing a father struggling to save his daughter from leukemia while fighting a murder charge, a far cry from his usual image as a pretty, young star. Some worry it is too far from Lee’s strengths.

But at a recent press conference, Lee said that the role has helped him discover a deep, paternal love that he had never experienced before.

Q. Is this your first time playing a father?

A. I never imaged playing a role that has a daughter. Of course there have been some roles that were hard to play, but this role was particularly new to me. I had to express love towards a daughter, a feeling which I had never had before. Every day I focused on this role and studied because, if the emotions don’t feel real, the whole show would go wrong.

Does this role make you think more about marriage?

True. As I focus more on drama and playing the role of a dad, I have thought a lot about marriage. I keep on thinking “Is it time for me to get married?”

How is filming going?

I play a character that runs away and stays low. There is one scene that shows me digging into the ground to hide. It was a scary scene because it felt like how I might feel when dying or getting buried.

The show is set in Busan at the beginning. Why don’t you use a Busan dialect?

Personally speaking, I feel comfortable speaking in dialect, as I’m from Busan. But, I talked to the drama director and we decided that acting in dialect could actually hurt my ability to focus on the character. So none of the major characters in our program speak in dialect. Next time, I’ll show you good acting using a dialect.

Your show is in competition with the SBS drama “The Master’s Sun,” starring actress Gong Hyo-jin and So Ji-sub. What do you feel about that?

Because the genres are so different, I cannot wish for more then if each drama does well with the audiences who like each genre. summerlee@joongang.co.kr