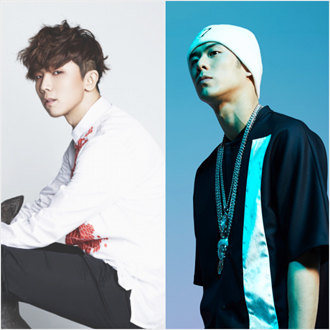 Singer Junggigo has partnered with rapper Beenzino for his next project, set to be unveiled on April 17, his agency Starship Entertainment, said yesterday.

“The recording is finished and in the final stages. We are confident that they will be a ‘hip-hop-buster,’ because they put their heart and soul in to it,” it said.

Junggigo, whose real name is Go Jung-gi, recently set a record in the Korean music industry: For four consecutive weeks on the KBS live music program “Music Bank,” his duet “Some” with So-you of Sistar has remained in the No. 1 spot.

The song’s popularity came as a surprise and was bigger than anticipated, catapulting both singers into the spotlight.

Beenzino, a graduate of Seoul National University, is a renowned indie rapper who has generated hit tracks such as “Dali, Van, Picasso,” “Aqua Man” and “Boogie On&On.” He has previously worked with Junggigo, who featured in his song “yourbody” last year.