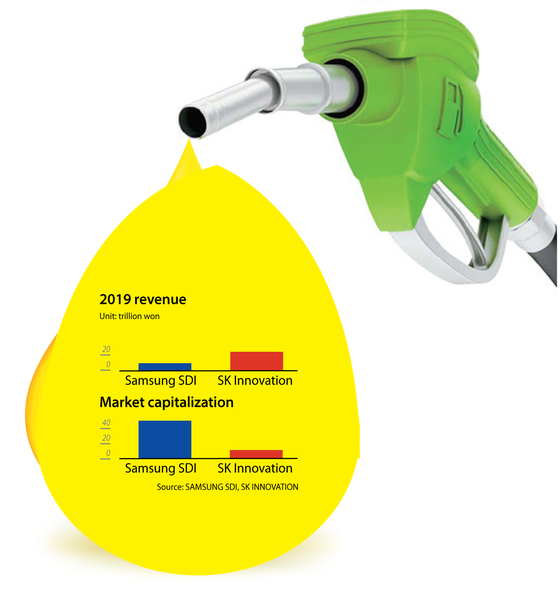 While market shares of electric vehicle (EV) battery makers such as Samsung SDI and LG Chem are growing steadily, oil refinery companies remain weak worldwide due to reduced demand as a result of the Covid-19 pandemic.


Samsung SDI posted 462.2 billion won ($372.9 million) in operating profit and 10.1 trillion won in revenue last year. The market capitalization stood at 24.7 trillion won (359,000 won per share) based on the closing stock price on Friday. Samsung SDI's share price stood at 208,500 won at the end of May last year, which means it has risen by 75 percent in a year.

The reason why Samsung SDI's stock price is so high is that about 75 percent of the company's revenue comes from the battery business. Of the 2.4 trillion won in revenue posted by the company in the first quarter of this year, about 1.8 trillion won came from lithium-ion batteries, a type of rechargeable battery, for EVs.

LG Chem is considering a spinoff of the battery business division, according to reports.

Oil is not doing so well.

"I don't think the demand for oil will ever return to where it was before the pandemic," British Petroleum (BP) CEO Bernard Rooney said in an interview with the Financial Times earlier this month. "I think we have already passed peak in oil demand,” he added.

On the other hand, EV adoption is speeding up worldwide.

"If the global auto industry’s announced targets for EV production are met despite the Covid-19 crisis, around 1,000 GWh of battery manufacturing capacity would be needed in 2025," the International Energy Agency reported, using the abbreviation for gigawatt hours.

As of now, global battery manufacturing capacity is only 320 gigawatt hours. This is why not only the companies in Europe and the United States but also in China are making efforts to expand their battery production lines.

As the oil refining industry is aware of this trend, the refiners are focusing on finding future businesses while reducing production through regular maintenance of production facilities.


Refiners are diversifying their revenue streams while minimizing costs. SK Innovation, Korea’s biggest oil refiner, rapidly expanded its EV battery business by making steady investments. This is how SK Innovation, a major global oil refinery, became the nation’s third-largest battery maker in such a short period despite conflicts with LG Chem over infringement of its EV battery trade secrets.

SK Innovation is the only major global oil refinery that produces batteries for EVs. SK Innovation posted 348.2 billion won in sales from batteries last year. According to SNE Research, SK Innovation ranked seventh in the global EV battery market in the first quarter.

"Covid-19 has accelerated competition between oil refineries and battery makers over the overall hegemony of the energy industry," said an official at SK Innovation. "The lions and tigers, which seemed unlikely to be in direct rivalry a few years ago, now became direct competitors."