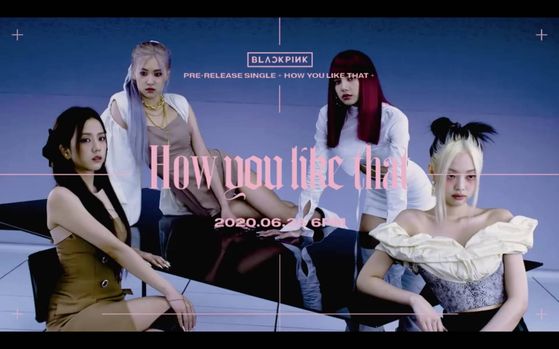 
The music video of K-pop girl group Blackpink's latest song "How you like that" racked up over 100 million views on YouTube at the fastest pace ever, its management agency said Sunday.


The 100 million views were reached at around 2:23 a.m. Sunday, about 32 hours after the music video was released, according to YG Entertainment.

The previous record was set by BTS in April 2019 with "Boy With Luv," the main track off its album titled "Map of the Soul: Persona."

"How you like that" is the first of the four-piece act's two pre-release singles from its first studio album scheduled to come out in September. A follow-up single was announced for sometime during July or August.

One of the biggest K-pop girl groups today, Blackpink debuted in 2016, storming multiple music charts back to back with their edgy hip-hop tracks "Whistle" and "Boombayah."