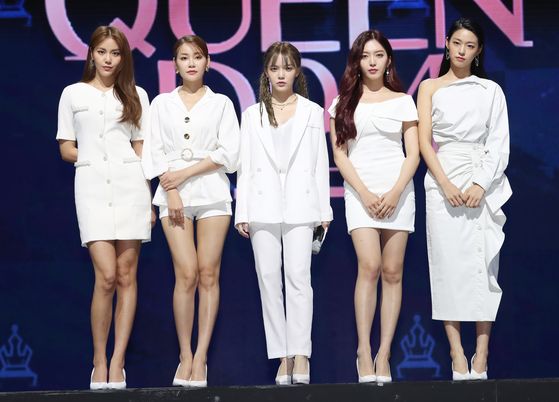 
Girl group AOA will not be taking part in the "Wonder Woman Festival 2020" this September, the festival organizer said on Monday after the group's leader Jimin, at center in the picture, quit the band last week due to a bullying scandal.

According to both the band's agency FNC Entertainment and the festival organizer micimpact, AOA withdrew from the lineup of stars set to feature at the two-day festival, taking place on Sept. 26 and 27 at the Nanji Han River Park, western Seoul.

The decision came after former member Mina accused former leader and rapper of girl group AOA Jimin of bullying her for the entire time she was part of the group.

In a series of Instagram posts, Mina alleged that Jimin had not only been the cause of her quitting AOA, but also blamed her for her self-harm.


Following the allegations, Jimin quit AOA on Saturday and announced that she will also be halting future schedules as a celebrity, although she did not resign from her agency.

AOA debuted in 2012 with eight members, and was left with five members last year when Youkyoung, Choa and Mina left at different times.

Choa's got something to drop on April 9