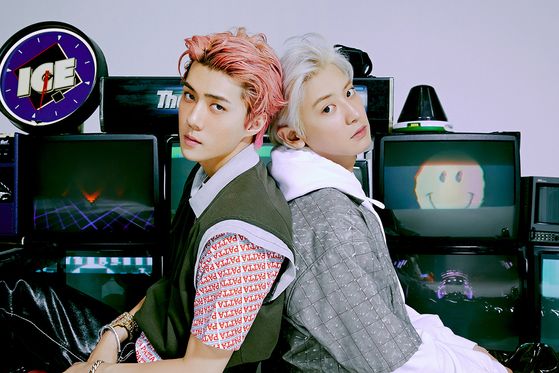 
Exo-SC, a hip-hop subunit of boy band Exo, released a surprise track on Tuesday evening for fans waiting for its upcoming full-length album, and promised it would drop another track at midnight Wednesday.

Exo-SC, comprised of members Sehun and Chanyeol, dropped the track "Telephone" on Tuesday 6 p.m. without prior notice, as a prerelease song from its full-length album "10 Million Views" set to drop on July 13.

"Telephone" is a melodic hip-hop track expressing the sentiments of a man who's secretly, madly in love, waiting all day for the phone to ring or get a text from his lover.

Singer 10cm was featured as a vocalist on the track, and the music video has already garnered over 4 million views as of Wednesday afternoon.

"Exo-SC will also release a solo track by Chanyeol, 'Nothin'' on Wednesday midnight through Naver V Live and YouTube," the agency said.

"Nothin'" is an R&B track written by Chanyeol, with dreamlike guitar sounds finished off with heavy beat bass. The lyrics express his will to "walk his own path regardless of other people" according to the agency.

All the other tracks from the duo's first full-length album "10 Million Views" will drop on July 13 at 6 p.m.