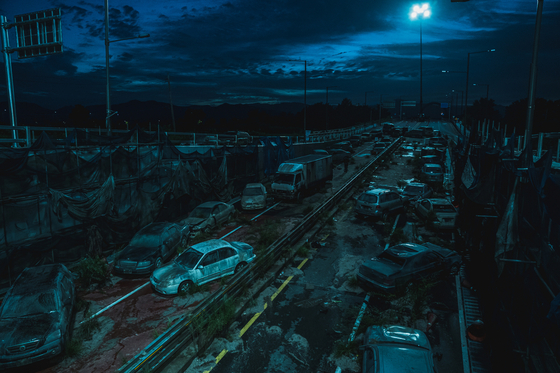 Four years after a zombie outbreak took over Korea, the country exists no more. Instead, the zombie-riddled landfill is referred as the Peninsula. [NEXT ENTERTAINMENT WORLD]

From left, actors Gang Dong-won, Lee Jung-hyun, Kwon Hae-hyo, Lee Re and Koo Kyo-hwan as Jung-suk, Min-jung, the old man known only by his surname "Kim," Jooni and Captain Seo. [NEXT ENTERTAINMENT WORLD]

In “Peninsula,” those four words strike terror as lights and sound are what entice zombies as does the trickling of honey for a swarm of hungry bees.

Ever since the global craze over “K-zombies” started with ”Train to Busan” four years ago, audiences around the world have been asking the same question: What happened to Korea after "Train"?

In response to that question, director Yeon Sang-ho has finally stretched the cinematic universe of “Train” for the eagerly awaited follow-up: “Peninsula" where he shows Korea four years after the zombie outbreak has taken place.

The film will premier in Korea on July 15.

In the opening scenes, we see Korea after the fall, in complete chaos following the zombie outbreak. Jung-suk and his family — his sister, brother-in-law and nephew — were able to escape the country by ship from Incheon port, but the sister and nephew are killed in a tragic incident, leaving only Jung-suk and his brother-in-law as the sole survivors.

The audience is quickly brought up to date with a barrage of news clips from the previous four years, and then the film reverts back to present day Jung-suk and his brother-in-law again.

The two drift around the streets of Hong Kong, unmoored and out of place. They end up accepting a deal they couldn't possibly refuse, and return to the peninsula. (In the film, Korea is no longer known as Korea and is instead referred to as the Peninsula.)

I really got a kick out of the imagining of post-apocalyptic Korea. Yeon really let his imagination run wild.

In the director’s notes, Yeon said that he really had fun building on the universe he started creating in "Train." The audience is treated to a desolate peninsula, introduced to a ruined Korea through the eyes of the returnees — ships are overturned, abandoned cars are scattered on the streets and buildings are crumbling.

In the cataclysmal world, humans can only be active at nighttime since zombies are practically blind when there are no lights. Places that I recognized, such as Omokgyo bridge and popular shopping malls, are eerily familiar yet equally horrifying in the world of Peninsula.

The movie goes all "fast and furious", as was alluded to in a press event last month. Car chases are more intuitive that they might at first seem. As zombies swarm, wicked driving skills become a survival tactic, making the difference between life and death. Teenage Jooni, played by actor Lee Re, knows how to get behind the wheel and shines in these scenes.

Yeon wasn't lying when he mentioned that her fighting skills trump those of actor Ma Dong-seok. Instead of punching her way out, Jooni effortlessly fishtails her way out and away from zombies.

The survivors in Peninsula certainly earned the title of survivors. The way they cleverly play with lights and sounds as distracting tools to entice zombies creates some entertaining moments in the film.

Although “Peninsula” is marketed as a zombie film, I saw it more as a dystopian drama, especially with the current context of Covid-19. It was frightening to see the characters as refugees, with no place, no country to call their own. For me, this sense of isolation was more frightening than the packs of bloodthirsty zombies.

As Jung-suk meets a diverse range of characters, we begin to question the distinction between humans and zombies. The society that exists in Peninsula is true chaos, and the humans are not better people for it.

Although the zombies have certainly evolved to become faster and even more gruesome in this sequel, what was more terrifying were the characters who clapped their hands in twisted delight upon seeing helpless civilians struggling to escape the zombies.

Two soldiers, played by actors Kim Min-jae and Koo Kyo-hwan, were the most terrifying of the living. (Personally, I felt these two somewhat upstaged the leads and became the focus of the film).

Koo, with his thin, narrow face, smallish figure and soothing voice, at first glance may not look particularly evil. But the depravity of his character is more subtle than that of Kim's character, who is nothing but savage. The insanity he delivered with his expressions gave me chills and were some of the most powerful moments in the film.

I wonder what's in store for this actor.

In the midst of the pandemonium, hope endures, the director seemed to be saying. In "Train," the ending leaves you grieving while hanging onto what the future holds for the characters, but there's a ringing message that love is an incomparable force.

Some might roll their eyes at the message, but I was reminded of what Yeon told me last year.

“When I was younger, I thought there existed horrifying sides in this world,” he said. “When I saw a touching story or something good on television, they felt strange and surreal to me. I believed that they were all lies. But as I got older, I think my perspective changed a bit… For the ending of ‘Train,’ some people might feel that it’s fake, like I did when I was young… [But] I think this generation is transitioning into one where we, to the best of our capabilities, try to make a better place for people to live in it rather than just complaining about it.”

Though it may sound cliché, I somehow felt relieved coming out the theater — a feeling I hadn't experienced in ages — for it may be exactly the kind of comfort that we need to get through this virus-ridden world.