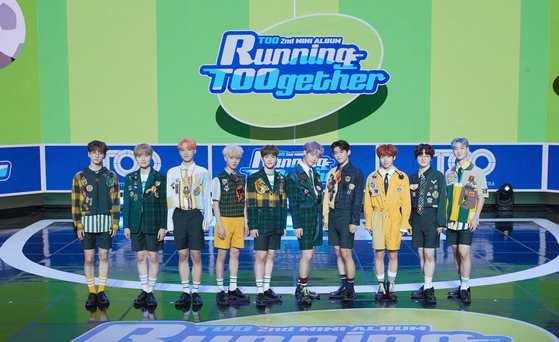 
Having debuted in April this year, boy band TOO is now aiming for the top and hoping to become one of the biggest bands to rock the K-pop scene with its second EP "Running TOOgether."

The band held an online showcase on Wednesday afternoon prior to the release of its new EP, which dropped at 6 p.m. Wednesday.

Showing a cuter and more refreshing side, members of TOO say that the lead song, titled "Count 1, 2," is all about their strong ambition to reach their goal of success. The message also asks Together, the band's fan club, to join them on their journey.

When asked how the new EP is different from the band's previous debut record, the leader of the band, Jaeyun, said, "If you close your eyes and count one, two, three with us and listen to our song, you will already feel refreshed. If our debut EP 'Reason For Being' showed our serious and strong side, 'Running TOOgether' is more refreshing and energetic.”

"We hope our natural laughter and energy can be delivered to our fans,” J.You said. 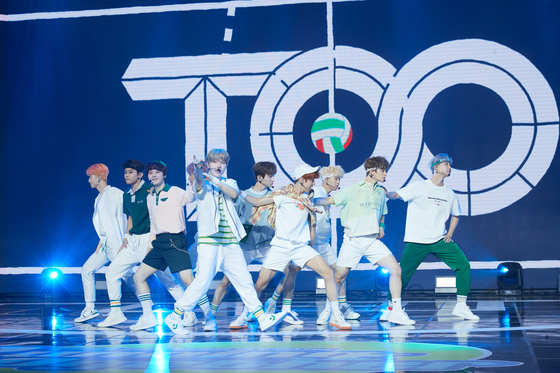 
The boy band, made up of members Chihoon, Donggeon, Chan, Jisu, Minsu, Jaeyun, J.You, Kyungho, Jerome and Woonggi, are the final 10 members from cable channel Mnet’s audition program “To Be World Klass,” which aired last year.

In the same month they made the debut, TOO joined "Road to Kingdom,” Mnet’s boy band competition show, and competed against other boy bands — Pentagon, ONF, Golden Child, The Boyz, Verivery and Oneus. The band took the title of “monster rookie” for their unbeatable stage performances.

"We learned professional spirit by looking at how other boy bands prepare their stage performances. It was our first time performing on a 360-degree stage, so we learned a lot about how to make the most out of the given stage," Chan said.

“The cover stage of the group GOT7's ‘Hard Carry’ was the most memorable performance,” Kyungho said.

The rappers, Chihun, Jayu and Chan, participated in making all the tracks on the EP.

"The strength of TOO is that all three rappers have distinct rapping styles," said Chan. "So we don’t need to fight over a line because we all have different tastes."

As well as the lead track “Count 1,2,” the five-track EP features “Step By Step,” “Better,” “Tailight,” and a remake of King Harvest’s “Dancing In The Moonlight” released in 1972.

On Tuesday, TOO released the first episode of the first reality show "TOO Mystery" on the YouTube channel M2.

"We have a lot of fresh content with the concept of zombies and horror to keep you cool this summer, so please look forward to the upcoming episodes," Jisu said.

TOO expressed their regrets over not being able to communicate with their fans in-person due to the prolonged Covid-19 pandemic. The group is preparing a lottery event for fans to meet them in person and take pictures.

“We want to meet our fans in-person on stage and at fan meetings, but since we can’t, we will come up with more online fan meet-and-greet events," Chihoon said.

“Running TOOgether” was distributed through various music sites such as FLO, Melon and Genie at 6 p.m. on Wednesday.