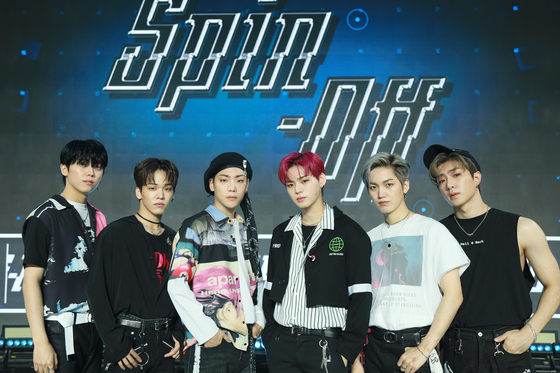 ONF poses on stage at the online media showcase held on Monday to celebrate the release of "Spin Off." [WM ENTERTAINMENT]

Boy band ONF aims to show that it not only has good songs but also great performances, as it celebrates its third anniversary since its debut, with the release of its fifth EP "Spin Off."

ONF held an online media showcase to celebrate the release of its fifth EP, "Spin Off" which dropped at 6 p.m. on Monday. This is the band’s first EP in ten months after its fourth EP “Go Live” and also its first release after making it to the finals of Mnet's boy band competition show "Road to Kingdom,” beating Pentagon, TOO, Golden Child, The Boyz, Verivery and Oneus. Through the program, which ended in June, ONF proved its onstage dominance and became known as the “boy band with great hidden tracks.”

The showcase started off with a stage performance of the lead track “Sukhumvit Swimming,” a song that has a hint of reggae, with a powerful, groovy and stylish beat best suited for the summer season.

ONF has been making music based on the concept of moving back and forth from the past to the future. But “Spin Off” is set in an unknown time.

“The song is very different from our past songs,” Hyojin, the main vocal of the band, said. "We imagined ‘Sukhumvit’ as a utopia that doesn't really exist anywhere in the past, present or future. It tells the story of falling into an unknown space that connects ONF and the listeners.”

In order to incorporate the colors of ONF in the music, MK and Wyatt helped write the lyrics of the title track "Sukumbit Swimming."

ONF met with fans live at midnight of Aug. 9, to give a sneak peek of the new release through the event dubbed "2020 ONF." During the online fan meet-and greet event, ONF pre-released two tracks from the new album, " Geppetto " and "Cactus,” drawing enthusiastic cheers from fans.

"What we hear the most is that we have many good hidden tracks. But we also want to get positive feedback for our performances as well," Wyatt, the main rapper of the band, said. "That’s why this time, we focused a lot on the performance."

The boy band said they want to be called a “Prism-dol” group, a mash-up of the words prism and idol. "Metaphorically speaking, ONF is the prism, and music is the light. When ONF meets music, it shows the colors of the rainbow. We want to show you various charms of ONF in different colors, so we’d like to be called a 'Prism-dol'.”