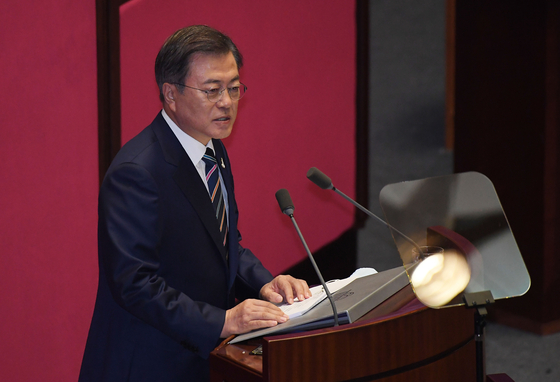 President Moon Jae-in gives a speech at the inauguration ceremony of the 21st National Assembly on Thursday. [YONHAP]

“We will add more burdens on multiple homeowners and increase the capital gains tax in order to assure that it will be impossible to make profit through real estate speculation,” Moon said in a speech to mark the inauguration of the 21st National Assembly.

“The government will use all possible means to end speculation and stabilize housing prices,” Moon said.

Since he took office in May 2017, Moon's administration has announced 22 sets of real estate cooling measures, largely focused on penalizing owners of multiple residence with steeper taxes. They, however, have done little to curb skyrocketing real estate prices, driving down the approval ratings of Moon and his ruling Democratic Party (DP).

In his speech, Moon promised to ease taxes on people who only own a residence to live in. More measures to support home purchases by the working class and young Koreans will be introduced, he said.

Those bills are expected to be passed quickly since the DP won an overwhelming majority in the legislature in April. The DP controls 176 seats in the 300-member National Assembly, enough to pass almost any bill except for a constitutional amendment.

Moon’s approval rating in the poll was the lowest since the corruption scandal surrounding former Justice Minister Cho Kuk. In the second week of October last year, the presidential approval rating bottomed out at 41.4 percent.

The public's frustrations with the ineffective real estate policy contributed to the falling approval rating this week, Realmeter said. The suicide of Seoul Mayor Park Won-soon and his alleged sexual harassment of a former secretary were also believed to drive down Moon’s rating, the polling company said. Park and Moon were political allies.

At the beginning of his speech, Moon noted that the 21st National Assembly has the most number of women lawmakers, celebrating growing gender diversity in the legislature. Of the 300 lawmakers, 57 are women, and Rep. Kim Sang-hee of the DP was elected as the first woman to serve as deputy speaker.

In his speech, Moon also addressed inter-Korean issues. He urged lawmakers to ratify a series of inter-Korean agreements produced through past summits. “If the National Assembly guarantees the advancement of inter-Korean relations and the irreversibility of peace on the Korean Peninsula, we will have a stronger foundation to push forward peace,” he said.

Moon expressed the hope that the 21st National Assembly will hold the first-ever parliamentary talks with North Korea.

Moon also urged lawmakers to cooperate with the launch of the Corruption Investigation Office for High-Ranking Officials (CIO). The office was scheduled to open Wednesday, but no progress was made in appointing its head due to a protest by the main opposition United Future Party (UFP).

Moon included a lengthy explanation of his Korean New Deal project in the speech. On Tuesday, Moon announced the program, aimed at creating 1.9 million jobs over the next five years with sizeable private and state investments.

Moon said it is imperative for lawmakers to approve deregulations to help the industry.

During the 30-minute presidential address, DP lawmakers applauded about 20 times. UFP lawmakers remained largely silent. Rep. Joo Ho-young, floor leader of the UFP, shook hands with Moon as the president was exiting after the speech. 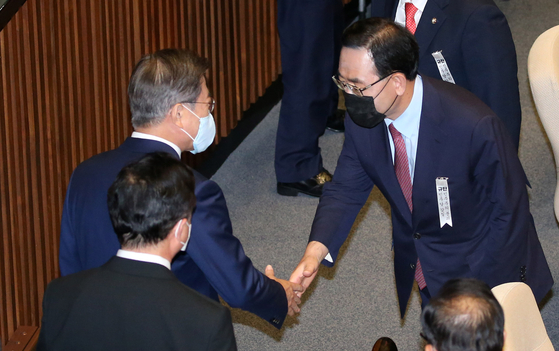 
The inauguration ceremony of the 21st National Assembly took place 47 days after the lawmakers started their four-year tenure on May 30. It is the most overdue opening of the legislature since 1987.