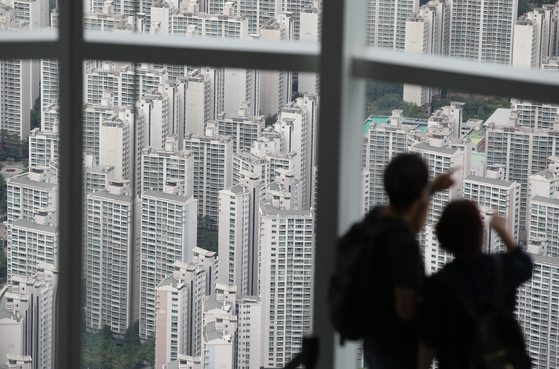 
Some Koreans are steeling themselves for jeonse shock, as property owners are set to raise the rates on the long-term housing deposits to make up for the increase in property taxes.


Under the jeonse system, a person can make one lump-sum payment in order to live in a property for a number of years. They receive the entire amount back, without interest, at the end of the contract.

A 41-year-old resident of an 84-square-meter (904-square-foot) flat in Nowon, northern Seoul, is having sleepless nights after the owner informed him a few days before the jeonse renewal that the price will be going up. The tenant has to pay an additional 80 million won ($66,000) on top of the original 360 million won.

The homeowner said he was sorry for the increase, but had no other choice in order to pay the huge increase in property tax billed this month. He is a retiree with a number of properties and supports himself through lease payments.

Jeonse prices had never come up before in conversations between the owner and the tenant.

“He was a kind-hearted homeowner who maintained the same jeonse price for the past eight years. To express gratitude, I would send gifts every Chuseok [harvest festival]. I am so resentful of the government’s real estate measures,” the tenant said.

In an effort to keep a lid on speculation, the government has increased property taxes. In general, its antispeculative measures have driven up the demand for property, leading to an increase in sales and jeonse prices.

Some of the increases have been dramatic. In one case, the total property tax bill for an owner with two apartments in areas designated as overheated rose from 27 million won before the July 10 measure to 71 million won after.

According to the Korea Appraisal Board, the jeonse price of apartments in Seoul continued an upward trend for 55 consecutive weeks since June last year. Prices rose by 0.13 percent in the second week of July, a steeper increase than 0.1 percent the week earlier.

Prices rose especially rapidly in the Gangnam region. In Songpa District, they rose by 0.26 percent in the second week in July, Gangnam District by 0.24 percent and Seoncho District by 0.21 percent.

The jeonse price for an 85-square-meter Jamsil LLLs apartment in Jamsil, Songpa District, jumped by 200 million won from June and is now trading at 1.1 billion won.

During the same period, the jeonse for an 84-square-meter Banpo Xi apartment in Seocho District increased by 300 million won, or 25 percent, compared to a month earlier. Currently, it is traded at 1.5 billion won.

“Since this area is especially popular among parents with kids, many tenants are just accepting the increased jeonse price. There’s barely any offerings out for sale in the market,” said a real estate agent in Banpo.

The ripples of the price hike are even reaching the outer limits of Seoul.

A jeonse for a 114-square-meter Raemian Prugio apartment in Ahyeon, Mapo District, increased by 100 million won in less than a month and is trading at 1.2 billion won.

Real estate agents say that a recent strengthening of real estate measures has pushed jeonse prices up. Homeowners are burdened with heavier tax after the government increased the appraised value of the real estate.

Taxes, such as property tax and comprehensive real estate tax, are based on the appraised value of real-estate decided by the government. The government recently increased the appraised price for homes so that it reflects the actual market value of the property.

On top of that is the increased capital gains tax and acquisition tax that’s preventing homeowners from selling their properties, decreasing supply in the market.

“Many retired homeowners that do not have a regular income are increasing jeonse prices to pay for additional property taxes,” said Kim Chan-kyoung, a real estate agent near Sujeong District in Gyeonggi.

“Whether they decide to sell the house or keep it, either way, homeowners are bombarded with taxes. It seems that the general sentiment is to hold on to their property as long as possible until prices go up,” said Kim Ji-eun, a researcher at the Korea Housing Institute.

This week alone, house prices in Seoul have increased by 0.09 percent. House prices have risen for six consecutive months since June 17, as if scoffing at the strongest real estate measures in history.

And many tenants are giving up on buying their house and changing to a monthly rent plan squeezed by numerous regulations on real estate loans, an increase in taxes and an incessant increase in house prices.

The transition rate from jeonse to a monthly rent plan is 4 percent, according to data from the Korea Appraisal Board. If a tenant changes to a half rent system instead of paying an extra 100 million in jeonse, they will have to pay 340,000 won a month in rent.

Experts speculate that the actual transition rate to be slightly higher, at 5 percent, which brings the monthly rent to 400,000 won. This is 15 percent of the average income [2.6 million won] of an urban worker.

“I'm cutting corners, even reducing education expenses for my children. But now, saving money is a pipe dream,” said a 36-year-old mother who changed to a monthly rent plan for her home in Sangdo-dong in Dongjak District, southern Seoul.

The ruling Democratic Party is firm on pushing for the tenant protection law.

Democratic Party lawmaker Yun Ho-jung proposed a revision to the housing law and Housing Lease Protection Act on July 14. If the law passes, rent prices will be capped by the government. Homeowners cannot refuse renewing lease contracts with tenants without a good reason. Tenants will be able to lease the house up to six years, much longer than the current two years

The next day, lawmaker Lee Won-wook proposed a revision to the Housing Lease Protection Act that provides even stronger tenant protection measures than the version sitting at the National Assembly. It took the maximum rent increase to below 5 percent and extended the protection to new tenants.

“The jeonse market affects the volatility in the housing market. In order to stabilize prices, the government needs to make fundamental changes in the market’s structure, such as giving tax benefits to homeowners that lower rent,” said Song In-ho, a researcher at the Korea Development Institute.

“If property tax was intended to prevent people from owning multiple homes, the government should at least amend policies regarding transfer taxes to encourage homeowners to put their property for sale and increase supply,” said Ahn Myoung-sook, the director of the real estate investment division of Woori Bank.