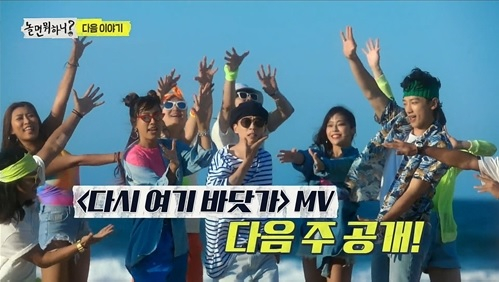 
SSAK3, a band put together by MBC's entertainment show "Hangout with Yoo," stormed charts over the weekend with its track "Beach Again," which was released Friday at 6 p.m.

SSAK3 is comprised of singers Lee Hyo-ri, Rain and entertainer Yoo Jae-suk, and will debut on July 25 in an episode of MBC's "Show! Music Core."

The track, composed by singer Lee's songwriter husband Lee Sang-soon, was released through local music services on Friday and is riding high on Korea's major music charts such as Melon, FLO, Genie Music and Bugs Music.

The song is in the No. 1 spot on FLO, Genie and Bugs, and at No. 3 on Melon's Now Hot chart as of Sunday morning.

"Hangout with Yoo" started in January. Yoo Jae-suk completed a variety of missions such as learning to play the drums and perform as a trot singer.

The show scored the highest viewership for all entertainment shows that aired on Saturday, obtaining a rating of 11.7 percent.