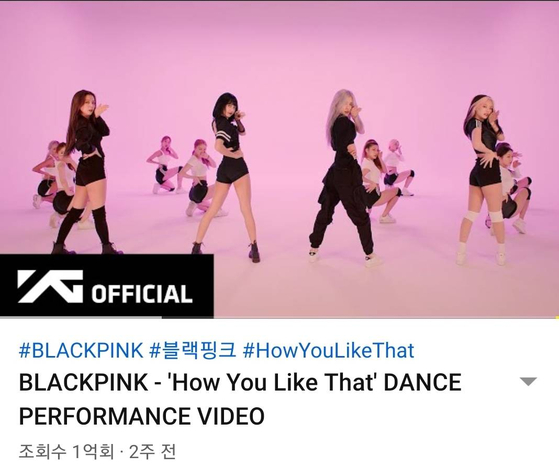 Girl group Blackpink’s "How You Like That" dance video has surpassed 100 million views on YouTube, the group’s agency YG Entertainment announced Wednesday.

Blackpink’s "How You Like That" choreography video surpassed 100 million views on YouTube at 6:45 a.m. on Wednesday, 15 days and 21 hours after it was released at 9 a.m. on July 6. The speed was more than twice as fast as the time it took for the group’s previous hit "Kill This Love" (2019) dance video to surpass the same record.

Meanwhile, Blackpink's music video for its latest hit "How You Like That" hit 300 million views on YouTube on Friday afternoon, just 21 days after its release on June 26.

The group now has 20 YouTube videos — including both music and dance videos — that have over 100 million views, while its official channel has the largest number of subscribers for a single K-pop act, with 42.2 million.