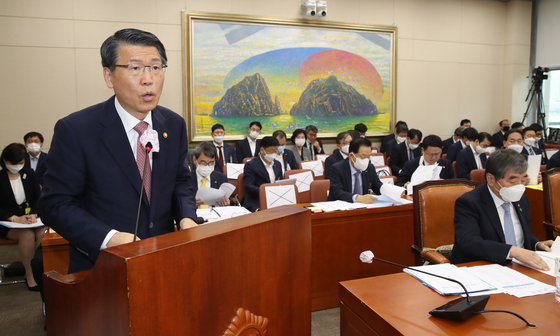 Chairman Eun Sung-soo of the Financial Services Commission speaks at a meeting held at the National Assembly in western Seoul, Wednesday. [YONHAP]


With trillions of won locked up and possibly lost as a result of massive failures in private equity, the heads of the country's two financial regulators have apologized and promised that all operators in the business will be inspected.

But they hedged their bets in terms of accepting blame, shifting the focus to sympathy for the victims and the inability of the business to police itself.

“I am sorry for the losses that occurred from the suspension of funds,” said Chairman Eun Sung-soo of the Financial Services Commission (FSC), in his opening address at a meeting held at the National Assembly in western Seoul, Wednesday.

“I feel a grave responsibility as the head of the FSS,” he said, but adding that the problem was the result of the “market's incapability to self-regulate.”

Lime Asset Management and Optimus Asset Management have been unable to return more than 1 trillion won ($838 billion) in customer funds. The regulators have said they suspect the money is not available due to bad investments, Ponzi-like structuring and possible fraud.

The two fund operators broke the law on multiple occasions, according to the FSS.

The FSS and the FSC have been the target of criticism for their inability to spot trouble regarding the funds before investors lost too much money, with some professionals wondering how they could have missed such huge losses for so long.

The regulators say they are going to do better.

“As we've stated in December and April, we will strengthen regulations on the management and sales of high-risk investment products. The FSS will also inspect 10,000 private equity funds and use this as an opportunity to improve the market environment," said Eun.

“Starting August, the FSS will conduct an investigation into all private fund operators, identify those that show signs of concern and strongly punish operators if found to have committed unlawful actions."

The FSS recently concluded the investigation into different parties involved in the trouble at Optimus, which has been ordered to suspend business. The regulator is also transferring the investments in both Lime and Optimus funds to a different operator.

The FSS said it is looking into other problems in finance.

It is investigating the peer-to-peer lending operators amid growing complaints from investors, promising to make efforts to protect small businesses and low-income groups from falling victim to illegal money lenders and financial scams.

Governor Yoon denied claims that the three tenant protection laws from the ruling Democratic Party would increase household debt already snowballing to record-breaking levels. The concern is that the laws would result in higher real estate prices, calling for greater financing.

He argued that the speed of increase is “slowing down” and delinquency rates are “at a stable level,” adding that the FSS will try to “keep the gross amount of real estate loans at a manageable level” as well as improve the household debt situation.

Korea's household debt ratio hit 190 percent of disposable income last year, according to a report submitted in June to a Justice Party lawmaker from the central bank. The country is ranked sixth place in terms of household debt among OECD nations.

Apart from the two leaders, senior officials of other financial institutions, including the presidents of the Korea Development Bank, Industrial Bank of Korea and Korea Deposit Insurance Corporation chairman, were present at the event.